Are you wondering if ants suffer the way humans and other animals do? Do Ants Get Sick?

How do ants prevent and treat illnesses in their colony? Are ants hygienic or dirty?

In this article we’ll find out, Do Ants Gets Sick?

Do Ants Get Sick?

Yes. Ants are susceptible to parasitic, bacterial, viral or parasitic illnesses in their close quarters. They are capable of spreading contagious illnesses with each other because they function so closely together.

However, ants are also hygienic and do their best to clean each other and clear their spaces from bacteria or dead members of their colony.

Ants secrete formic acid from their abdomens that safely kill fungal spores or pathogens from their bodies. They lick each other with this acid as a method of treatment.

Do Ants Suffer From Disease?

Ants are also quite hygienic so they are able to remove any types of bacteria, fungus, or dead bodies of their colony from their nest to maintain a clean and healthy environment for themselves.

This is how ants reduce their odds of dying from various illnesses, despite their close contact with each other.

What Do Ants Do When They Are Sick?

When ants are showing signs of illness, they tend to clean themselves. The worker ants surrounding the sick and will also do their best to clean their area and themselves.

Any ant that is sick will try to reduce contact with the others in the colony. This information comes from The Institute of Science and Technology in Austria. Extensive Studies have been made to show how and care for each other when they are sick.

They also make sure to keep their colony’s territory as sterile as possible. They do this in spite of plenty of flora and fauna that can cause multiple infections and contagious illnesses.

Why Do Ants Get Sick?

Ants get sick because they are social and they share tight spaces with each other. Ants make close contact and are very susceptible to catching contagious diseases.

Despite this ability to get sick, ants are incredibly astute at remaining hygienic. They remove garbage away from their zones. They can also change their behavior if they get sick in order to not spread any infections.

A sick ant will isolate itself from the rest of the colony. Ants live in spaces where germs, bacteria, parasites and fungi live amongst them.

They do their best to maintain a clean environment despite the close contact they make with each other and their surroundings. 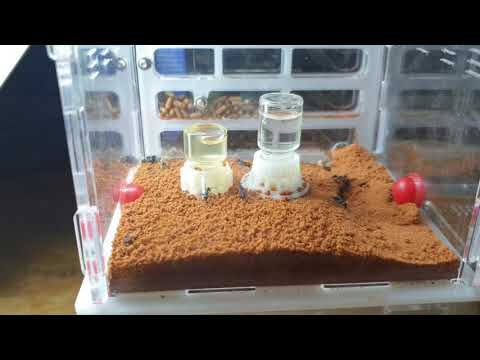 How Do Ants Prevent Getting Sick?

Aunt have an excellent sense of smell. They also use their antennae to touch and investigate their surroundings. An ant is able find festering bacteria or a fungus that is present on a member of its colony.

They are also able to smell tiny pathogens that threaten their colony. Their first instinct might be to clean themselves and their sick counterparts or isolate themselves in order to prevent others from the same contagious illness.

The health of the colony will always supersede that of the individual ant.

How Do Ants Heal Themselves From Illness?

Ants are able to keep their bodies and their environment as clean as possible with a number of methods such as:

Ants are able to produce formic acid in a gland at the tip of their abdomens. This area is called their gaster. This formic acid that they produce can kill bacterial or fungal infections that develop on their bodies.

They pick up the formic acid into their mouth from their gaster and begin to lick the bodies of their coworkers.

By cleaning the bodies of their counterparts, the pathogens or fungal infections become treated the same way we use antibiotic ointments.

What Is the Treatment for Ant Illnesses?

These ants are assigned the job of removing any dead ants from their nest. Undertaker ants also keep their distance from the rest of the colony.

They do this because they have already interacted with dead ants as part of their job and they do not want to increase the risk of spreading any diseases they have caught during this process.

Ants also care for each other by cleaning themselves to remove dirt, bacteria or fungus with formic acid that they can lick off their own abdomens with their mouths and transfer over to the body of their neighbor.

This formic acid treatment is also used to disinfect eggs and young ants as a form of disease prevention.

Why Do Ants Carry Dead Ants?

Ants carry the dead away from their colonies. They do this to protect their queen and their nest from being contaminated.

This is an excellent form of preventative behavior to reduce the chances of spreading contagious illnesses. A dead ant releases a chemical called oleic acid. This should not be confused with the formic acid that ants can produce to sterilize themselves and each other from infections.

The oleic acid can be smelled by their antennae and assigned “undertaker ants” swiftly remove the carcass away from their nest.

Ants are incredibly intelligent at using preventative measures to keep diseases and illnesses at bay. They must protect the colony and their queen at all costs.

A sick ant will stay away from the nest. Neighboring ants will attempt to clean ill ants with formic acid they secrete through their abdomens in order to heal or disinfect.

Related posts:
What Ants Do on Rainy Days {Watch Out!}
Do Ants Pee Acid? {Is It Really True?}
What Do Ants Eat in an Ant Farm? {Why Are They Dying?}
Do Ants Eat Honey? {Honey vs. Sugar Explained}

Home » Insects » Ant » Do Ants Get Sick? {How Do They Prevent Getting Sick?)