My backyard is a battleground for squirrels chasing each other and looking for food. One thing I always wonder is, “Where Do Squirrels Poop?”

Why do I not see it? What does it look like compared to other rodents? Are there special areas that squirrels designate as their toilet?

In this article, we will discuss everything there is to know about, where do squirrels poop?

Where Do Squirrels Poop?

This means that they do not create one space and designate it for their droppings. They may continue to roam around and poop while they are walking or running.

Squirrels can leave their droppings in hard-to-reach locations high up on trees or roofs and this is why you may not notice them. Do Squirrels Poop As They Walk?

The following rodents tend to poop as they walk:

Defecation while walking is a common occurrence in many rodents. It is unclear why they do so. but one major theory suggests that squirrels feel vulnerable when they are in one position for a long period of time.

Stopping and defecating creates a moment of opportunity for a predator to attack. This is probably why squirrels have developed the ability to poop on the go.

Do Squirrels Poop in a Pile?

Squirrels do not poop in a large pile. They can drop several pellets behind as they are on the move. You won’t find more than three to ten pieces or pallets of squirrels droppings in one area unless they are your pet or very comfortable on your property.

Squirrels may leave their feces in the same area on your property. This means that they have grown accustomed to your backyard or surrounding property and do not feel threatened by any predator nearby.

In this case, squirrels can end up leaving large pile of feces in one area as they continue to return there. In the wild, squirrels will poop in different areas on the move and therefore they will not leave a pile behind.

Where Do Pet Squirrels Pee and Poop?

Pet squirrels feel comfortable with their enclosures. They like to poop on the sides of the cages or pee onto the floor. They will not want their cage to be surrounded by their own defecation.

If squirrels are let loose around your home, they will run around and poop in all different areas. In some cases, squirrels can even eat their own poop.

Squirrel poop should not be considered toxic if you are feeding your squirrel all its meals and you know what they are ingesting. 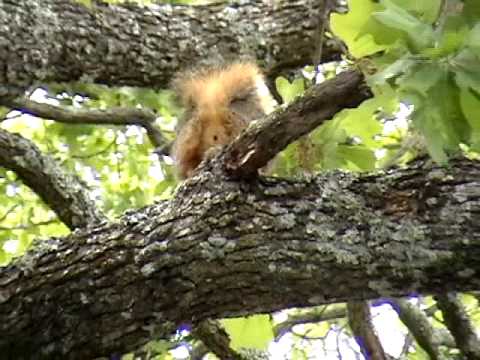 Is Squirrel Poop Toxic to Humans?

Squirrel feces is not necessarily toxic to humans. If the feces remains for a long period of time and accumulates in a pile it can develop into salmonellosis.

If you are accidentally exposed to squirrel poop, it can cause some of the following adverse reactions:

There are a couple of squirrel diseases known as tularemia and leptospirosis. They can be attributed to the poop that accumulates and is not cleared away.

If you know that squirrels are pooping in your home, you must clean and clear them up before they become toxic. It’s better to be hygienic, clean and safe than handling a bigger mess when sicknesses develop.

Do Squirrels Poop in One Place?

Their droppings are camouflaged and hard to notice. This is why it is difficult for many people to ever witness a squirrel’s defecation or see any remnants behind.

How Do You Identify Squirrel Poop?

Squirrel poop and rat poop are both dark brown or black. The difference between them is the shape. Rat droppings have more of a shape that it resembles a spindle. Squirrel feces isn’t tapered at the ends.

Squirrel feces is also a little bit more rounded. You can tell the difference also by the contents inside the feces. Usually squirrel feces contains more moisture. This allows it to have a wider girth.

Is Squirrel Poop Toxic to Dogs?

More often than not, squirrel poop is not toxic for dogs. Some squirrels may contain diseases or parasites. If a dog is sniffing around or making contact with a dead squirrel, these parasites can end up landing on to your pet.

Squirrels are also known to have fleas and ticks. The droppings of a squirrel are even more toxic if they are remained there for a long period of time and your dog happens to make contact with it.

In some cases, it can cause your dog to have:

In most cases, a squirrel’s poop is not going to be considered toxic if it it hasn’t remain there for a long period of time.

Visit the vet if your dog is unwell after a recent trip where they have investigated areas that may have contained droppings of wild animals. Squirrel feces has the following characteristics:

In most cases, squirrel droppings are larger than rats or mice. Since squirrels obtain more moisture from the food they eat, their droppings can appear larger and wider. They are also slightly more moist.

You may also see traces of nuts or seeds in their droppings. You will not notice this with rats or mice. Their droppings are more solid and harder to determine what they have eaten.

Yes. Squirrels can poop anywhere and everywhere. Their droppings can appear larger or barrel-shaped compared to the smaller and oblong shaped droppings that rats or mice produce.

Squirrels can drop their feces in many different locations including:

In many cases, they will drop and go. You will not find a squirrel remaining in one area for too long while they defecate. This allows them to be safe and nimble to never leave themselves open for attack.

What Problems Can Squirrel Droppings Bring?

Squirrel feces and their urine can cause problems with disease and molding. Mold leads to other adverse health risks. There are unpleasant smells that come from squirrel poop. It’s usually due to their pheromones they release.

Other issues with squirrel droppings involve the threat of diseases, allergic reactions and particularly respiratory effects with people suffering from asthma.

Fleas and ticks may also be present on the bodies of squirrels. They may end up in their feces as well if squirrels were able to bite them off of their own bodies and ingest them.

Why Do We Never See Squirrels Poop?

Many times we do not see squirrels poop. The reason being is that squirrels do so high up in trees or on top of buildings. They would like to poop in locations that are farthest away of any potential threats.

Squirrels are vulnerable to attack while they are pooping. Also, their poop blends in with tree bark, soil and leaves.

Squirrels do not leave piles of poop in the wild or outdoors. If you are noticing large piles of poop, it is probably a different rodents such as a possum.

Where Do Baby Squirrels Poop?

Baby squirrels poop in their nests. This can create an unsanitary environment to grow and mature with the risk of diseases that can develop.

A mother squirrel’s job is to carry the poop of their babies out of the nest for their own safety. Squirrel poop is also a dead giveaway of their nest’s location.

A predator may smell it and find easy targets in a nest. This is another reason why their poop must be carried away.

Squirrels poop more discreetly than many other animals. This is why it’s hard to see their droppings. Squirrels wants to poop in locations where they are not seen. In other cases squirrels can poop on the go.

In both cases, squirrels are trying to remain hidden or not vulnerable to any attack. If they are moving while pooping, then there is no chance for them to get attacked from behind when they are not noticing. Squirrel droppings are also highly camouflaged and hard to notice.