Ants are intelligent with peculiar motives and actions. Will Ants Eat Dead Ants?

Why would an ant bother with a dead ant when there is plenty of other food or work like foraging and intricate tunnel building to be done? Are ants attracted to dead ants?

In this article, we will find out the answer to the question, “Will Ants Eat Dead Ants?”

Yes, but this is probably not what you’re seeing. If it comes down to death by starvation or eating a dead ant, they will choose the latter.

In most cases, the dead ant emits oleic acid and pheromones as chemical signals which alerts others that they need to get rid of this body to prevent exposing the colony to disease or give away their location to possible predators.

There are especially assigned undertaker ants who usually take the body to a spot in their tunnel or a grave site away from the rest of the colony. When it comes down to desperation, ants will eat nestmates and ants from other colonies.

What Do Ants Do With the Dead Ants?

Dead ants need to go. The oleic acid they release can be sensed by other insects and fellow ants alike. Their counterparts must arrive first and get rid of the evidence.

The location of their colony is at risk of being discovered if a dead ant isn’t removed. Undertaker ants are given the worst job to dispose of the body.

Are Ants Attracted to Dead Ants?

Yes. The pheromones and oleic acid that dead ants release can attract healthy ants to arrive and inspect the situation. They do not want to spread disease in their colony and need to keep their mound/tunnel systems as clean as possible.

Fluids are flowing out of the dead ant and this is giving away their location to possible predators or ants from other colonies. They need to get rid of the bodies fast and carry them to designated zones or grave sites that are marked for this purpose. 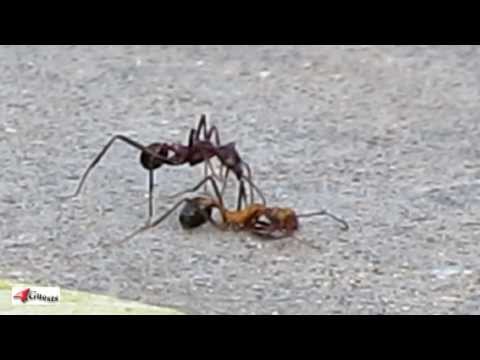 Do Ants Consume Their Dead?

Cannibalism is not the first option for ants. They have plenty to eat in their stored caches and will work hard to find more sources of food. Eating a fellow ant would be out of desperation.

They have a better strategy for dealing with the corpses of dead ants. They designate ants as undertakers to remove their bodies and take them to areas where they will decompose far away from the colony to avoid the transmission of any illnesses that could spread.

There are plenty of scavenging insects who will show up to eat this dead ant. Other animals may as well. A dead ant releases oleic acid and pheromones which gives away its location.

What Happens When You Kill a Queen Ant?

When a queen ant dies the colony will soon perish as well. The queen decides who eats and how much. She builds up the colony and the workers continue to bring her food and other resources.

They will continue to work, but no further ants will be born and the remaining population will soon die off. Multiple queens is the only way the colony will continue, but this is rare.

Usually worker ants respond to one queen only and potential queens at the same time will be killed off.

Why Do Ants Carry off Dead Ants?

Ants are hygienic in so many ways. They understand contamination and the threat it can introduce to their fragile colony. They wish to remove dead ants as soon as possible to prevent the possible spread of disease and illness.

There are chemical signals in a dead ant to communicate to others that the body must be removed. The pheromones or oleic acid released can invite unwanted scavengers to their territory.

Yes. Ants can swarm around a dead carcass, but this is not their preferred food source. They would rather hunt for live prey or look for carrion.

Eating meat off decomposing bodies is saved mostly for larger animals like vultures and ants do not wish to interfere with that. There are plenty of ant species who will take the opportunity to feed off dead insects or animals in opportunistic situations.

Yes. Ants will take the opportunity to eat insects that are alive preferably, but also dead or dying. The easy kill depends on their numbers or the overall health of the prey who could be an easy meal. Ants will eat:

The strength in numbers allows ants to grab hold of any larger insect and cover it completely with an army that can’t be defeated.

The colony of workers team up against one common prey and perform a much easier task of pulling it apart to transport the nutrition back to their queen.

Yes. Ants eat plenty of insects and invertebrates. They are not picky eaters, but mosquitos do not provide as much nourishment and are hard to catch.

Ants will not actively hunt for mosquitoes. Mosquitoes are more nimble and faster. An ant will not be able to catch a mosquito unless it is newly hatched or slowly dying.

Butterflies should find another plant to rest on or else they can be covered by ants in a hurry. Dead butterflies or ones that are trying to emerge out of their cocoons are easier targets for ants to consume.

Ants are always looking for food and have no time to distinguish between any vulnerable insect as their next target.

Related posts:
How Long Can an Ant Live Without Food & Water? {Do They Store Food?}
Why Do Ants Love Sugar? {Why & What To Do Here}
Can You Eat Ants Alive? {Will You Get Sick?}
Are Ants Poisonous to Dogs? {Can Dogs Eat Ants?}