Have you ever seen these fuzzy and cute little critters and wanted to touch them? Are Woolly Bear Caterpillars Poisonous?

In this article, we’ll find out the history and folklore to understand if woolly bear caterpillars are poisonous.

Woolly bear caterpillars look poisonous because of the furry texture that resemble the spines of many other venomous caterpillars. Fortunately, they are not poisonous and non-toxic.

The fuzzy hairs should not sting and most children and adults can enjoy handling them without any worries.

Once in a while their hairs can break off in irritate the skin or eyes. These hairs can cause inflammation in some people who accidentally ingest them.

Staying away from caterpillars that have spines on them is a good idea because many of them are venomous, but not the Woolly Bear caterpillar.

Why Do People Think Woolly Bear Caterpillars Are Poisonous?

Since many caterpillars that have bristly hairs are venomous, it’s easy to think that making contact with a wooly bear caterpillar would also lead to irritation or allergic reactions.

If you can properly identify a caterpillar before you pick it up or touch it, then you might be able to identify the wooly bear caterpillar and realize that it is not toxic.

Would It Be Safe to Pick up a Wooly Bear Caterpillar?

Yes. It’s completely safe to pick up a woolly bear caterpillar. They are rare cases of allergic reactions, but most people do not experience anything but joy from picking up a little fluffy caterpillar that is friendly and harmless to touch.

Moth caterpillars are a separate category that contain hollow tubes through their bristles that contain venom.  If one of these bristles break off in the skin, they can cause pain or allergic reactions.

Woolly bear caterpillars are also bristly, but there are no venomous spines on its body. The tubes of their bristles do not contain any poisonous glands.

The worst case scenario is usually irritation in your eyes or skin by those who have sensitivities to many of nature’s creatures and wonders. 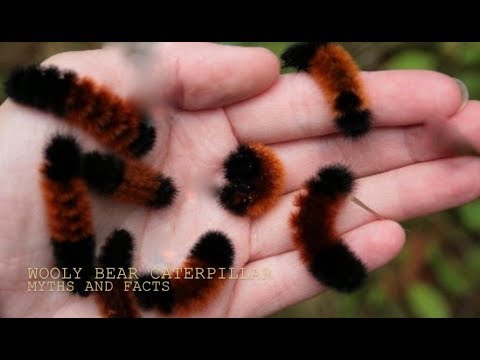 What Is a Woolly Bear Caterpillar?

A wooly bear caterpillar is also known as:

The banded woolly is highly recognizable. It is black with one rusty center stripe. Calling them hedgehog caterpillars is because they curl up in a ball when they feel disturbed.

Sometimes they point their bristly hairs outward and show us that they do not want to be touched. These hairs are an active protection from predators, such as birds who may not be able to detect that this is a living creature.

Although the woolly bear looks warm with these bristles covering it, it works in the opposite way to help them freeze up for the winter.

What do Woolly Bear Caterpillars Eat?

Woolly bear caterpillars are opportunistic eaters during their growth and feeding stage. You can find them in many places where there are plants growing. This is a list that we created for you to give you an idea of the multitude of foods that they could eat:

Woolly bear caterpillars do not bite. The only side effects would be if there was a person who had acute allergies to the hairs of this harmless creature.

This is not a caterpillar who has no venom in its bristles. If you pick up a woolly bear caterpillar, it may play dead by curling into a tight ball.

This is a defense mechanism to ward off any predation from birds or other animals that have learned to hunt for these nutritious tiger moths in waiting. That’s right, when a woolly bear caterpillar becomes a butterfly it will turn into a tiger moth.

Woolly bear caterpillars have gained notoriety for the myth that they can predict the severity of winter in some states dating back to colonial America.

The narrower the band on their back that is rusty color, the more severe the winter weather will be. A wider band predicts a milder winter season. This is obviously not a scientific discovery and one that dates back to Historic colonial America.

Width of of bands are indicative of the number of molts they have through. It has nothing to do with predicting the weather.

Which Caterpillars Are Poisonous?

Caterpillars that contain spines tend to be poisonous. There are exceptions like The Woolly Bear caterpillar that is not poisonous.

We have compiled a list of 15 popular caterpillars that are venomous or poisonous. This means they shouldn’t be touched, handled and definitely not eaten.

You can touch a wooly bear caterpillar. Even though they make curl up into a fuzzy little ball in order to play dead as a defense mechanism for avoiding predators, you can pick one up without any worries.

The spines can sting some people with sensitive skin and their hairs can break off when you touch them. Be gentle because some of these hairs can cause minor irritation to your skin or eyes.