Do you have a can of Raid at home and you see or hear crickets? Does Raid Kill Crickets?

Will a simple spray of Raid get rid of crickets in your home? How fast does Raid kill crickets?

In this article, we’ll explore the topic of killing crickets with a very popular insecticide that you may already know.

Raid is a multi-use aerosol bug spray that claims to be able to kill crickets along with many other insects including, but not limited to ants, roaches, silverfish and wasps.

The problem with Raid and other aerosol sprays is that application of using spray cans doesn’t allow for the insecticide to remain active for a long period of time.

Why Is Raid Not The Best Way To Kill Crickets?

The thin layer that is applied with Raid will dissipate or fade rather quickly. Aerosols don’t last very long and the insecticides in Raid break down very fast.

Crickets may die on contact with Raid sprayed directly on it, but once the remnants of this spray fades, other crickets may return.

Crickets will respond better to a concentrate solution in a bowl with sugar or molasses mixed with baking soda or boric acid and water.

They will be drawn to the sweet nectar. Molasses alone will make them stuck, but adding a teaspoon of boric acid with dehydrate and kill them from the inside out.

How Long Does It Take Raid to Kill Crickets?

Raid is a powerful killing agent, but the strength of the ingredients is delivered through an aerosol spray. The aerosol delivery system spreads out the insecticide within, but also weakens it compared to concentrated doses of liquid killing agents in one localized area.

Raid claims that it may take up to 15 minutes to kill a cricket and other bugs if you use their product indoors. Maximum efficiency of Raid requires for ample amounts of spraying to leave layers of its insecticide on surfaces that may last up to 4 weeks.

In our experience and with the advice of professional exterminators, we have concluded that this aerosol insecticide spray dissipates, fades and breaks down too fast to be considered as your best choice for killing crickets other bugs.

Will Bug Spray Kill a Cricket?

Bug sprays definitely kill crickets and other bugs, but it doesn’t encourage them to walk over or through it. The video below shows a licensed professional determining that Raid in particular and many other aerosol bug sprays don’t do a great job at killing on contact.

The bait trap method of setting sugary substances mixed with boric acid would entice a cricket over to taste it. This is a better way to kill a crickets without spraying toxic fumes all over your property.

Make sure to keep pets away for either option when using toxic chemicals to kill pests. 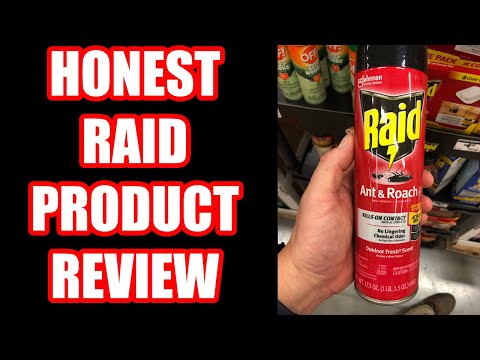 Will Roach Spray Kill a Cricket?

Even though brands like Raid advertise that their spray is intended for one type of insect over another, it doesn’t mean that it won’t work on others. A roach spray is not much different than an all-purpose bug spray.

If you know that crickets are hiding under baseboards or in cracks and crevices, spray the roach spray if you have some handy. Spray near windows, windowsills and other openings where crickets can come and go.

Roach spray will work, but you are not limited to only spraying options. Bait traps can also be purchased or made at home to get rid of crickets as well.

Yes. Crickets eggs are stationary while adult crickets are actively moving around through the night. Adults jump, crawl and climb to find the best places to mate and lay eggs.

A bug spray like Raid is much more successful at killing cricket eggs. If you see them, spray Raid all over them and they will become unviable on the spot.

You have successfully thwarted a future cricket infestation by killing the eggs before they hatch. Adult crickets may never return to make contact with the killing agent in Raid because there is nothing in the chemicals that draws them to it.

Yes. The label and advertising for Raid Max claims that it will kill the following bugs:

How Do You Get Rid of a Cricket Infestation?

You can try the following methods to get rid of cricket infestations:

Crickets will die from the toxic fumes and chemicals inside most brands of bug sprays such as:

Yes. Interestingly enough, Windex can kill many insects. If you have a bottle of Windex nearby and nothing else, start spraying a cricket that you see with it. The cricket will die in under a minute.

You can add vinegar to the contents inside the bottle of Windex to make it even more powerful at killing insects. Windex is a multi-purpose cleaner with chemicals that flood the pores of crickets and cause them to suffocate.

How Long Does Raid Last After Spraying?

Raid claims to last up to four weeks after spraying. The brand says that the residual action of spray remnants from 4 weeks ago will still be able to kill bugs. The list includes ants, roaches, flies and even crickets.

We tend to disbelieve this claim unless you have emptied as much as a quarter of the bottle on a particular surface and never wiped or cleaned it for the following month. It’s much better to set bait traps instead.

Home » Insects » Crickets » Does Raid Kill Crickets? {Why Raid Is Not Your Best Choice}