Do you wish to hunt gophers with your dog? Are you wondering are gophers dangerous to dogs, and can dogs eat gophers.

In this article, I’ll cover everything you should know.

Gophers are not harmful and can be safely eaten by dogs. However, poisoned gophers are unsafe and could poison your dog. Gophers with worms could also infect you dog with worms.

Dogs are omnivores; therefore, they feed on flesh and can eat gophers. If you train your dog to hunt gophers, it may begin to eat the tiny squirrel after hunting, and this isn’t bad for him as long as the gopher is healthy.

Should I Let My Dog Eat Gophers?

Dogs eating gophers isn’t bad, but you must be careful what type of gopher your dog eats. For instance, if a gopher eats poison and your dog hunts it down, the poison could also affect your dog.

In other words, if your dog eats a poisoned gopher, your dog could be poisoned too.

That might be difficult to tell, especially if you didn’t see the pest before your pet picked it up.

Therefore, eating healthy gopher is safe for your dog, but it is better to prevent them from eating if you doubt whether the gopher has eaten poison or not. Also, most people use gopher poisons to get rid of them in their surroundings.

If your dog is of the attitude of eating gophers and it found one roaming around, it might hunt it down and begin to eat in your absence.

It might not be able to tell if the gopher is poisoned or not. Hence, it is safer to train your dog not to eat the little mammal.

Are Gophers Harmful to Dogs?

Neither the skin nor the intestine or blood of a healthy gopher is poisonous for dogs. Therefore, just as dogs can hunt and feed on other squirrels, they can eat gophers as well and be fine doing so.

However, should your dog eat a poisoned gopher, the poison could be transferred through a process called transference.

The process involves the transfer of poison from one animal to the other through eating. When a gopher ingests a poison, the poison settles in its intestine before it rots.

Hence, if a pet picks up such a pest, it could ingest the poison in the intestine as well and be poisoned too.

In other words, a healthy gopher can’t harm a dog; instead, it is a dog that could harm a gopher. However, the moment the gopher is poisoned or has worms, it could harm any dog that picks it up.

That way, it isn’t the gopher that harms the dog, but the poison or worms in the gopher. 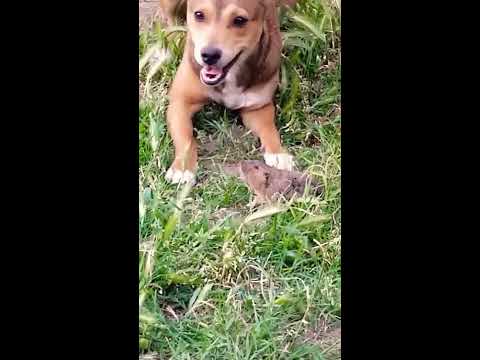 Dogs can hunt and kill gophers. This is fun for most dogs, especially if they are trained for such a purpose. The terrier breed performs wonderfully in this regard because they are specifically bred for hunting small mammals.

Dogs love hunting; hence, they can go to the extent of searching around for gophers to kill them. Besides chasing gophers around, they can hunt them down in their holes as well.

If there are too many gophers in your vicinity, your dogs may do wonders helping to kill them.

However, some dog breeds might be lazy for such activities. Therefore, if you need a dog breed to chase and kill gophers, the terrier breed is a good option for you. It is a natural instinct for them to chase and kill rats, squirrels, mice, and gophers.

Gophers are raw, yummy meals for dogs. However, such a yummy meal could be poisonous and make a dog sick if the pest was poisoned.

For instance, if a gopher eats a seed-like bait coated in zinc phosphate or strychnine, a dog could end up sick or even dead if it eats such a poisoned gopher.

Dogs don’t need to eat the whole poison in the gopher’s intestine; about 1 ounce of strychnine is enough to poison and kill a 50 to a 70-pound dog. In other words, gophers cannot make dogs sick, but the poison in a poisoned gopher can make a dog sick.

Can Dogs Get Rabies from Gophers?

Gophers can carry rabies like other mammals; thus, your dog can get rabies from this tiny pest. Although the pest doesn’t exhibit the symptoms, if it has rabies, it could infect your dog with a bite.

Dogs often hunt gophers out of their hidden space. During such a process, it could be bitten by the gopher in self-defense. In such a case, if the gopher has rabies, it automatically infects the dog through its saliva.

Once bitten, rabies in the saliva gets into the cut, and the dog is infected. However, if a dog is vaccinated against rabies, it won’t be infected even if bitten by a rabies-infected gopher.

Besides dogs, gophers can also infect humans with rabies and other diseases like plague, monkeypox, and Hantavirus. Kids are usually victims of this because they might be naïve enough to dip their hands into the pest hole and get bitten in the process.

Therefore, you should ensure to get rid of all the gophers in your vicinity.

Related posts:
Differences Between Gopher vs Mole: {Similarities & Differences}
Will Gophers Eat Tomato Plants? {Do They Like Tomatoes?}
Why Do Cats Eat Gophers {Is it OK To Eat Them?}
How High Can Gophers Climb {Can They Climb Trees & Fences}