Have you ever heard squirrel sounds? How Do Squirrels Communicate? Do they only use noises or do they have a language?

Does body language or scent glands play a part in squirrel communication? What does it mean when a squirrel is screaming at you?

In this article, we will discover everything there is to know about how squirrels communicate.

How Do Squirrels Communicate?

Scroll can’t communicate with each other in the following four ways:

Squirrels are vocal and carefully employ teamwork with frequent communication to ward off predators or warn each other to stay away from certain areas where predators are likely to be located.. How Do Squirrels Communicate With Their Tails?

Squirrels are able to flick their tails for the purpose of communication. The tails could make a thumping  noise or a flick sound to communicate to each other that there are possible predators nearby.

A squirrel’s fluffy large tail gives them away. The tail helps them to regulate temperature and even create visual distractions when predators are in front of them.

For example, if a rattlesnake confronts a squirrel, the rodent can waive its tail back and forth to imitate or confuse the snake.

Rapid tail movement can make a squirrel seem larger than it actually is. Rapidly shaking its tail can signify that a squirrel is:

How Do You Talk to a Squirrel?

Have you been seeing the same squirrel in your backyard day in and day out? If so, you can begin talking to it and see if they feel comfortable to come closer to you.

My father has named the squirrel in his backyard Charlie. He calls Charlie’s name and after many months of imitating the chirping sounds that Charlie makes, they have been able to communicate much more.

This squirrel has become comfortable enough to listen to my father and eat in his presence. Speak to a squirrel in a calm voice. Do not make sudden movements or loud sounds.

The squirrel is easily spooked by a larger creatures such as ourselves. Practice imitating the same noises that they are making. Copy the chirping, offer food and speaking calmly.

What Sounds Do Squirrels Make to Communicate?

The kinds of noises that squirrels make are described as:

Many of these sounds are used for the purpose of communicating when there are predators nearby. They are used as alarm calls. 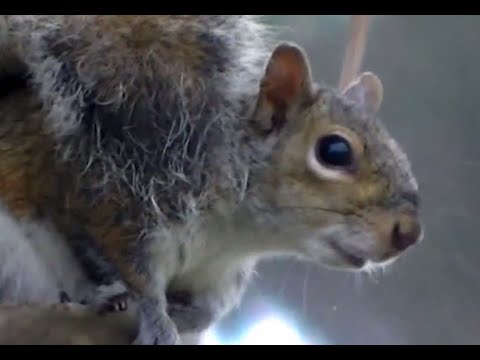 How Do Squirrels Call Each Other?

If squirrels are interested in mating with each other, they may make different styles of noises that do not resemble alarm calls. Let’s differentiate between the two.

If a squirrel is trying to make a noise to signify mating calls it may sound more like:

Why Is a Squirrel Yelling At Me?

Squirrels can make loud noises that sound like they are yelling at us. This is an alarm signal to warn us to back away.

Instead of warning their own counterparts away from a predator, they may directly start relaying alarm calls directly at the threat themselves to keep them away.

Some larger predators are annoyed or disturbed by such a loud scolding sound that they may decide to move forward or carry on without attacking the squirrel.

This squirrel is mistaking you for a predator or a potential threat and they do not want to risk the chance of you hunting or preying on them.A yelling sound that you are hearing from a squirrel is a final and last Resort attempt to get you to back away.

Yes. Squirrels can recognize human faces that are frequenting their lives. You can train a squirrel to come to you for food. You can offer food consistently throughout the days and weeks and it should become a lot more comfortable with you.

Offering food consistently to a squirrel can create a habit that might be detrimental to their overall life in the wild. They may depend on it and stop their regular routines of collecting food and storing it for the winter.

If it will come to the same location where they recognize you and you are not there, they may feel confused and begin disrupting your property.

If my father doesn’t give his friend, Charlie the squirrel, a piece of food every morning, he may end up digging up plants and tossing pots over.

Why Would a Squirrel Cry In a Tree?

If a squirrel is making a crying sound in a tree it could be one of two things:

A male squirrel would imitate a baby squirrel’s crying sounds to show nearby females that it is not a threat. It is not as cry that is similar to a screech when squirrels are marking or fighting for territory.

This type of crying sound can be heard when squirrels are chasing each other. It’s an inviting sound that signals that the male is not a threat to the female.

What Sounds Do Squirrels Make When Happy?

Pet squirrels have been known to make purring sounds when they are happy and comfortable around you. An excited squirrel could also make chirping noises.

When you arrive home, your pet could begin flicking its tail knowing that you will begin giving it attention and possibly playing with it.

Wagging a tail or these purring noises signify that a squirrel is happy around you.

What Does it Mean if a Squirrel is Barking?

A barking sound is an aggressive alarm signal that squirrels make to communicate to each other. If one squirrel is barking towards others, he or she is warning them that there is the danger or possible threat in their territory.

The barking sound will ward off predators or alarm other squirrels squirrels nearby to hide or flee the premises.

Sometimes the squirrel will bark directly at the predator. This is a last-ditch effort when the squirrel feels cornered and would like to force a predator to find another target.

Yes. Many hunters use squirrel calling devices. There are many different types on the market. Using a squirrel call is effective at drawing them out.

There are bellowing style calling devices. They can feature a whistle and a barrel. You may also have a device that you can shake to mimic the barking and chattering sounds squirrels make. Some devices offer you an option to blow into it to make baby squirrel distress calls.

There are different vocalizations for gray or fox squirrels. Different sounds can be integrated into the barrel of the squirrel calling devices. You can either shake them or blow into them.

Squirrels can make vocalizations to signify nesting, mating, aggression, or warnings. Baby squirrels can cry for their mothers while male squirrels can create barking noises or even sneezing sounds to get the attention of a female.

Frightened squirrels can also let out shrills or screams. There are many different types of alarm signals that squirrels can make to warn each other of possible danger or potential predators in their territory.

Squirrels can flick their fluffy tails to regulate their temperature or to visually distract others. Sometimes they are flicking their tails back and forth to make themselves look bigger than they actually are.

Flicking their tail can also imitate other animals such as rattlesnakes. When a squirrel is flicking its tail back and forth,  they can confuse or upset a potential predator to the point where they may leave the area and search for an easier target.

A squirrel can use body language to show emotion. It was squirrel is erect and standing upright, it is alert and ready for any type of encounter with a territorial dispute from another male or a potential predator in the territory.

A relaxed posture can indicate that a squirrel is inviting and offering females for potential mating. If a squirrel is stomping its feet and thrashing its tail, it may be warning an enemy nearby to back off.

Squirrels can leave scent trails to mark their territory. They can also leave clues to other counterparts who may wander nearby. They can rub their cheeks or leave scent glands around shrubs or branches of trees.

Related posts:
Where Do Squirrels Get Their Water? {How Much Do They Need?}
Squirrels vs. Rats {How to Tell the Difference}
How to Keep Squirrels Out of Fruit Trees {Top 8 Methods}
Why Do Squirrels Run in Front of Cars? {The Truth Behind Squirrel Roadkill}