In the early spring you might see a lot of tiny red bugs on concrete, These bugs are spiders and are called clover mites.

In badly infested areas there can be hundreds of these tiny red bugs!

Tiny Red Bugs on Concrete, What Are They?

The small red bugs on concrete are tiny spiders called Clover Mites. They are typically found on lawns, around plants and on concrete.

They are 0.75 to 0.85 millimeters long and having an elongated first pair of legs. In the below video, you can clearly see, how small they’re and they move really fast. 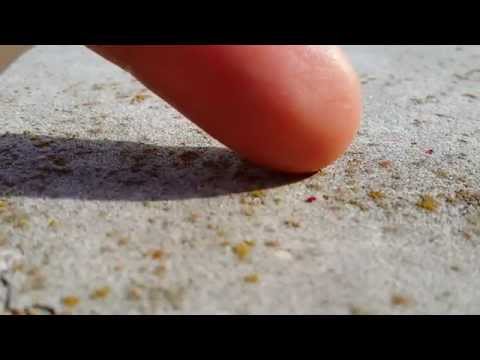 These tiny red bugs will hang out and nest in grass and plants as this provides them with lots of safe places to hide.  They will only walk over concrete to travel from one area to another.

Why Are They Called Concrete Mites?

Concrete mites and clover mites get mistaken for one another. Clover mites have much longer front legs and are more reddish brown in color compared to smaller, bright-red concrete mites. Concrete mites get their name by enjoying their time on, you guessed it: concrete.

Clover mites feast on clovers as one of their favortie plants to consume, hence the name. They also eat grass, dandelion, primrose, alyssum, daffodil and other plants as past of their staple diet.

How Do You Get Rid of Little Red Bugs on Concrete?

The best way to get rid of clover mites is to spray the affected area with an insecticide such as ortho home defense insect killer which will directly kill the clover mites on contact.  You should then also spray the surrounding area thoroughly.

It’s important to learn that clover mites lay eggs in cracks and crevices, and sometimes pesticides can’t kill them until they’ve hatched. So, you may have to repeat the treatment a few times. To get rid of red clover mites follow these steps:

Once you kill all the clover mites that you see on the cemented surfaces, then create a perimeter around your house, and increase the size of the perimeter by spraying this Talstar Pro Insecticide.

This way, they’ll not enter your house, and you’ll kill all the clover mites sitting outside on the cemented surfaces.

Next sprinkle granules such as Ortho Home Defense Insect Killer Granules  over the grass and plants where you have seen the clover mites.

3. Dealing with Clover Mites Inside Your House

If clover mites are inside in your house, then you should use a Pest Control Spray such as Wondercide Natural Indoor.

Just spray it on the places where you see the tiny red bugs, and make sure you spray in all the cracks and crevices. Repeat this process every week or 3-4 weeks.

A clover infestation cycle lasts about a month. A fully grown adult clover mite will survive for around 2 weeks. The weather and seasons determine the infestation duration and cycle.

Clover mites survive less than a week indoors. At this point, a single clover mite will dehydrate and die. This also means they do not breed or reproduce in your home.

The eggs of a clover mite is usually laid in the latter stages of Autumn. They hatch in Spring. The new generation of clover mites become adults by the summer and aim to reproduce for the next fall season.

Can Clover Mites Live In Your House?

Yes. Clover mites do not wish to live in your home unless some of the reasons below cause a mass indoor migration:

They will crawl in your home through the cracks in or around your windows and doors. The smallest of gaps can offer an entryway for clover mites to become an indoor resident.

Although clover mites are a nuisance and not welcome in our homes, they will not survive longer than a few days. After this brief period, they will dehydrate and fail to reproduce.

It’s time to get rid of these pests. Start spraying. Look for products that contain:

Have no fear. Clover mites are easy to defeat. Any fast acting insecticide spray should pack enough of a punch to knock out these pests. We recommend these options below:

Spray into all cracks, crevices or directly on any infestation you see. Roaches, spiders, sugar ants, and other critters will be affected indirectly by these sprays and the message will be loud and clear: Stay away from my home.

No. It’s very rare for a clover mite to successfully reproduce inside your home. The aim for clover mites in populated areas where people dwell are to lay eggs in:

The eggs will become mature in about 30 or more days. You must act before they hatch, become a new generation and reproduce.

Thankfully, clover mites run the risk of dehydration and death in your home. This leaves them looking for a suitable place outdoors to reproduce instead.

Are The Tiny Red Bugs On Concrete Chiggers? The little red bugs on concrete are tiny insects that are called clover mites. People often get confused between clover mites and chiggers.

To differentiate clover mites from chiggers, you have to observe them closely. The clover mites have a spider-like body. And, the biggest difference is their long front legs, which looks like an antenna.

Are Clover Mites Harmful to Humans?

No, they do not cause any harm to humans. But, still, they become a nuisance to people when they notice these tiny red bugs running on the concrete, They will also try to enter into our house by hanging around the doors and windows.

When they get crushed accidentally, they leave red-colored stains on doors, windows, and on carpets. Generally, they live in large colonies, and they feed on grasses, plants, flowers, and vegetables.

Are Clover Mites Harmful to Pets?

We have good news to share when it comes to your safety and your pets. Clover mites are not harmful to either of you. These nuisance pests do not spread infections or diseases to pets or humans.

Clover mites concentrate on reproducing and feeding on plants. They do not wish to crawl into your home, furniture, items or products. Will clover mites bother cats? Are clover mites harmful to dogs? No and no.

The main issue is that clover mites wish to spread. Even if they die within a few days in your home, they will seek shelter and look for plant matter to absorb.

How to Prevent Clover Mites Infestation

To prevent clover mites from entering your house, you can spray an insecticide outside your house. Spray it on the doors & windows, and also at the boundaries of your yard.

You can use the pesticides in your yard, or around your house. It is not the most effective way, but, at least it’ll provide you some sort of protection.

So the next time you see something like orange or reddish mites like spiders, you’ll not ask questions like “Hey, what are these tiny red bugs on this concrete wall?”

You’ll know the answer. They’re clover mites. Are you seeing any small red insects near your house? If yes, then how are YOU dealing with them?

Related posts:
Clover Mites vs Chiggers {How To Easily Tell Them Apart}

Home » General » Tiny Red Bugs on Concrete: How To Get Rid of Clover Mites