Have you ever seen ants carrying a dead member of their colony? Why Do Ants Carry Dead Ants?

Do ants perform a funeral style procedure or is this simply as method of survival? What does a dead ant mean to the colony?

In this article, we’ll discover why ants carry dead ants.

When an ant dies, it releases oleic acid. This acid gives off a strong scent to other ants who realize there is a dead colony member nearby. The death of one ant create an added risk of spreading illness to the rest of the colony.

Designated undertaker ants must carry this ant away from the colony to a safe spot where the ant can decompose safely. They usually create a midden, graveyard or specialized chamber where all dead ants go to preserve the safety of their colony. Do Ants Transport Their Dead?

Ants feel the need to move the dead members of their colony to protect their queen and themselves. Dead ants release oleic acid and can also increase the risk of contamination if they are carrying a disease.

It is a learned behavior to ants who communicate via chemicals. The release of oleic acid is the strongest chemical scent for communication.

A dead ant will attract more ants to the site where it has perished. The least desired job is the role of an undertaker who must carry dead ants to a makeshift graveyard called a midden.

Where Do Ants Carry Dead Ants?

Ant colonies need to work diligently to protect themselves and their queen first and foremost. They have to remove dead members of their colony and carry them away to a trash pile.

This is a place that is designated far enough from the colony to prevent contamination. It could also be a specialized chamber in their nest. A mature colony would have designated a place such as this to act as a graveyard. It also can be referred to as a midden.

The undertaker ants are tasked with removing the dead individuals and taking them to this midden. They will be attracted to the release of oleic acid coming off of a deceased corpse and will act quickly to remove the perished member of their colony as soon as possible.

Do Ants Eat the Dead Ants?

Ants are capable of eating each other if the opportunity presents itself. They do not prefer to eat members of their colony that have passed away because of contamination risks.

They would prefer to carry dead ants away to a designated zone that is a specialized chamber in their nest or somewhere further away that acts as a graveyard.

Ants will eat each other at moments of desperation. If there are no other food sources available, they must act quickly to provide food for their queen. They may have to eat their own kind or find other insects and bugs near them that have recently died.

Ants are not the only critters that eat their own kind. Others include: 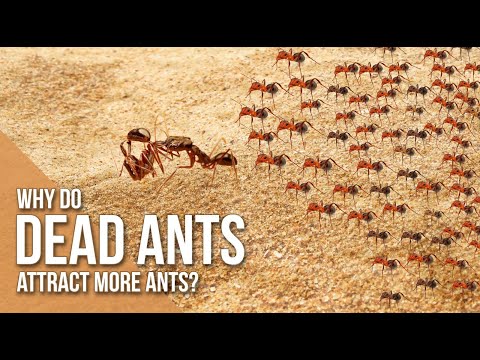 What Do Ants Do When They See a Dead Ant?

Ants act quickly when they see a dead ant. They care about the sanitation and preservation of their colony to keep it clear and clean from contamination.

The type of sanitation behavior that ants undergo is called Necrophoresis. This occurs when a dead ant releases oleic acid and acts as a beacon for undertaker ants to arrive and carry them away.

The dead ants will be taken to a specialized chamber called a midden or a graveyard far enough from the colony in order to keep their space sanitary.

Yes. Dead ants certainly attract other ants to arrive. This is why it is not a good idea to kill ants and leave them there. If you do so, other ants will arrive.

They are acting as undertakers to carry away the dead ants in order to preserve the location and sanitation of their colony. The pheromones that ants release upon death is called oleic acid.

These fluids flush out of their body and it gives a signal of danger to other ants nearby. They rush over to carry the dead in order to preserve the safety of their colony and their queen.

Should I Clean Up Dead Ants?

Yes. You should definitely clean up dead ants in order to prevent more from being attracted to it. Ants are also very clean in this regard, and they will arrive to clean up if you do not.

The problem is that if you are not the one that is removing the dead ants away, you will be attracting many more ants to your property. This is because the dead ants are releasing pheromones that are very strong and ants communicate through chemicals.

The chemical in this case is called oleic acid. Ants need to keep their colony meticulously clean and sanitary. They do not want to risk contamination. This is why they have to arrive and remove the dead, but at the same time you may end up with more ants infesting your property.

Does Killing Ants Make it Worse?

It is better to repel ants than to kill them. If you place bay leaves for example, ants will not want to go near it. Other scents such as essential oils or even drawing a line with chalk releases scents that disrupt the ability of ants to find food or trails that lead them back to their colony.

Ants communicate by their sense of smell and through chemical releases. A dead ant is going to release oleic acid and it’s going to make things worse because more ants are going to be drawn to it.

Dead ants release a strong chemical scent called oleic acid and draws more ants to it. They act feverishly and swiftly to remove the dead bodies and pile them in a graveyard called a midden to keep them away from their sanitary colony.

The health and safety of the queen comes first. Dead ants must be removed, but if you don’t do it, they will. If you do not want a bunch of undertaker ants arriving at the scene, sweep up the dead ants and spray some vinegar or soap on the area where they have perished.

Related posts:
How To Get Rid of Ants From Chilli Plants {Best Way Here}
Will Ants Eat Dead Ants? {Are Ants Cannibals?}
What Do Ants Eat in an Ant Farm? {Why Are They Dying?}
Do You Need a Queen Ant for an Ant Farm? {Will They Die Without A Queen?}