Do roaches infest your home or business place? Are you wondering does alcohol kill cockroaches.

Is it possible to kill this “stubborn” insect with alcohol?

Alcohol will kill cockroaches because they are attracted to the alcohol and they often drink to stupor which will cause them to drown and eventually die.

Roaches die when they take too much alcohol. Often, they get attracted to the sugar content in alcoholic drinks like beer. They continue drinking due to the high sugar content until they lose consciousness. They drown and die.

When cockroaches drink alcohol, especially beer, they get carried away with its sugar content and continue to drink until they get drunk. At this juncture, just like a drunk human, they lose their sense of control and are unable to fly. They get weak and end up inside the alcohol.

Since they breathe through the spiracles in their hard shell, the liquid quickly fills the hole, preventing the insect from breathing.

This will eventually suffocate the cockroach to death. However, sometimes, you don’t have to make the cockroach drink the alcohol; you can also squirt their spiracles.

This also follows the same principle as though the insect drowned in alcohol. The squirted alcohol will fill up the hole and suffocate the roach.

Besides drowning, spraying alcohol can also kill cockroaches. They have an oily exoskeleton which helps to keep them hydrated and prevent their internal fluids from drying out. 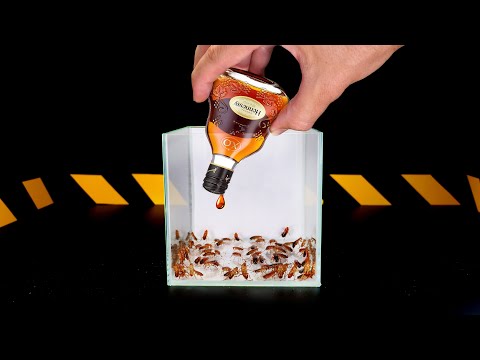 Alcohol washes away the oils drying up the skeleton and making it brittle. This allows moisture to escape, and the cockroach will eventually dry up. However, this may not be as effective as allowing the roach drink to stupor.

Cockroaches are fast and might escape while you try to hit them with spray.

Cockroach eggs can’t die by spraying them with alcohol. This is because alcohol isn’t poisonous to them. The eggs don’t also have spiracles or holes yet through which one could suffocate them by spraying alcohol.

Alcohol doesn’t contain any toxic compound that can kill either a cockroach or its eggs. Note that the mechanism on which it kills roaches isn’t a poisonous mechanism but a drowning mechanism.

Since the part of roaches that makes it drown when sprayed with alcohol or when it gets drunk is missing in the egg, the egg is safe even when sprayed.

However, if you wish to get rid of roaches’ eggs, there are several other efficient methods you can adopt. You could spray boric acid on the egg. This will hinder the egg from further developing, and it’ll eventually die.

Are Cockroaches Attracted to Alcohol?

The argument that roaches are only attracted to alcoholic drinks like beer because of their sugar content alone isn’t strong enough. We can prove this by performing a simple experiment which goes thus:

This shows that sugar alone isn’t the only thing attracting the insect to alcohol.

Thus, there must be a second factor and perhaps a third factor. Alcohol like beers comprises an extract from the hops flower.

Entomologists also claim that another thing that makes cockroaches attracted to alcohol is this extract called hops. In other words, cockroaches love alcohol, and they’re often attracted to it.

How to Kill Cockroaches With Alcohol

You can kill roaches with alcohol by opting for either of two methods. The first is to make them drown in a bowl containing alcohol, and the second is to spray them with the alcohol.

If you’re determined to eliminate the alcohol in your home, you can follow the steps indicated below:

The spraying option could be time-consuming and stressful, especially if your home is heavily infested. Therefore, the luring and drowning method is easier and preferable.

Related posts:
Do Cockroaches Make Noise at Night?
How Quickly Does Baking Soda Kill Roaches {Does It Even Work?}
Can Cockroaches Get High & Drunk? {Find Out Here]
How to Prevent Cockroaches in Wardrobe {9 Ways To Keep Them Away}