Have you recently seen cockroaches drowned in a glass of beer?

Are you wondering if they can get high and drunk?

You’ll learn all you need to know in this article.

Cockroaches love beer; therefore, they can drink until they get buzzed.

Entomologists argue that this insect is not attracted to beer to get drunk; instead, they’re attracted to it for its high sugar content. Can Roaches Get High?

Cockroaches can be intoxicated by alcohol, therefore, should the insect drink a lot of it, they could get high. Often, they get carried away with the sugar content in beer, causing them to continue drinking until they get high.

Alcohol does not only intoxicate humans; it intoxicates insects like roaches too. Therefore, if cockroaches drink too much alcohol, they’ll get high.

To confirm this, you can perform a little experiment using a beer. You can follow the simple procedure below for the experiment:

You’ll be amazed to find a couple of dead cockroaches drowned in the cup of beer while the cup of water might contain no cockroaches.

This indicates that the cockroaches don’t get into the cup of beer by accident; if they were, then you should find them in the cup of water as well.

However, finding the cockroaches dead in the cup of beer alone shows that they’re attracted to the beer and drink until they get high and can’t fly again. This explains why they drowned and died. Therefore, cockroaches can get high.

Can You Smoke Out Cockroaches?

You can smoke out cockroaches using smoke-bomb-style insecticide. The device produces an insecticide cloud that chases cockroaches out of their hidden space and eventually kills them. This is a highly effective method of getting rid of cockroaches in your home.

When people refer to smoking out cockroaches, they usually mean using a smoke-bomb-style insecticide. Such smoke will toxify the air the cockroaches breathe in, forcing them to come out of their hideouts. The more they try to escape by running out of their hideouts, the closer they get to the smoke, thus, eventually killing them.

However, smoke-bomb-style insecticide isn’t only toxic for cockroaches; it could be toxic for your pets as well. Therefore, if you want to smoke out cockroaches, you must do it correctly. You may follow the steps below:

Remove all consumables from the room to be smoked. You should also keep your kitchen utensils safe so that they aren’t affected as well. Take your pets out of the room and lock the window and door. You should also put off your central air systems. That way, there’s no escape route for the smoke, and it will be more efficient to kill all the roaches in the room.

Protect yourself by covering your mouth and nose using a respirator or paper mask. This is important so that you don’t get affected by the smoke. Point the bomb away from you and leave the room as soon as possible.

Stay away from the smoked room for about 24 hours before you return. Returning earlier than that could mean you didn’t give enough time for the smoke to perform its required function of ridding all the cockroaches.

Cockroaches don’t die easily; however, leaving them in a closed smoked room for 24 hours is enough time to kill them all.

Open the doors and windows for cross ventilation so that the remaining smoke could escape. Mop the floor and turn on the central air system if there’s one.

Now, you can bring your pet back in. That way, the smoke would have been replaced with fresh air; thus, you and your pet are safe to stay in there while all cockroaches have been smoked out.

Cockroaches smell like smoke, and such a smell could also be described as oily, musty, or sooty. The smell comes from the pheromones they give off. However, it takes a lot of cockroaches to produce a noticeable sooty smell.

Cockroaches don’t smell nice; they stink. Try killing one with your shoe, and you’ll be disgusted by the foul smell that follows. However, even while alive, cockroaches stink; the smell only becomes more noticeable when you smash them.

They smell like soot, which could also be described as musty or oily. In a simpler term, cockroaches smell like smoke. However, this doesn’t mean a single cockroach in a room can produce enough smell to irritate everyone in the room.

You rarely perceive the smoke smell from a distance, except when you get closer to the cockroach. Contributing to this smell is a nauseous secretion from the gland opening in their body and their mouths. 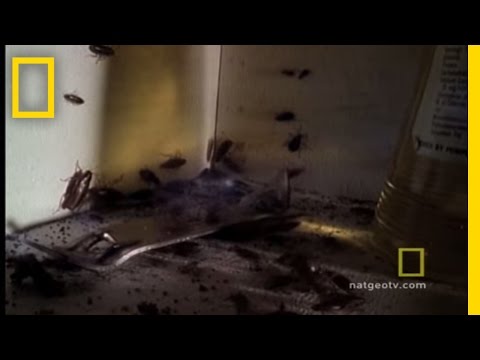 Can Roaches Get Drunk?

Cockroaches are known for getting drunk when they drink beer or other types of alcohol. Entomologists explain that they are attracted to the sugars and hops in beers; thus, they continue to drink until they get drunk.

Since cockroaches like beer and once they get drunk, they drown in the beer. Most people adopt this to their advantage as a home remedy to get rid of the brown insect. They keep the beer in pie pans and keep the pans away from pets and human interference so that no one tampers with them.

If there are cockroaches in the room, they’ll find their way into the pie pans, get drunk in the beer, and eventually drown since they are intoxicated and can’t fly. You can also adopt the method to kill all the roaches in your home effortlessly.

Although a beer may not taste sweet to you, there is enough sugar in a glass of beer to attract a cockroach. The nasty critter in question is not looking to get drunk off the liquid content in a glass of beer.

The cockroaches are attracted to beer because of the sugar and also the hops that are located in every bottle or a glass of beer.

Cockroaches are looking to extract nutrients to stay alive. They are one of the best survivors over generations for their crafty nature. The next time you leave your craft beer out, place a coaster over it to keep cockroaches away.

If you are using vodka for example, you may not be able to kill a cockroach. A cockroach is not going to enjoy the taste of vodka.

Related posts:
How to Get Rid of Cockroaches Without Killing Them {Top 10 Explained}
Do Cats Kill Roaches? {Do They Eat Them?}
How to Prevent Cockroaches in Wardrobe {9 Ways To Keep Them Away}
Things You Need To Know About German Roaches Bites