Have you recently found your cat eating gophers? Do you wonder Why Do Cats Eat Gophers?

Is it safe for them to eat? What if they catch and eat a lot of them?

Yes, Cats eat gophers.  Gophers are rodents and it is a natural instinct of a cat to hunt and eat gophers.

So this explains why your cat eats gophers. In other words, hunting and eating smaller animals is in a cat’s biology and ancestry.

Is it safe for cats to eat gophers, Yes it is, but I will cover more on this below.

Gophers are rodents, and cats eat rodents; therefore, cats normally eat gophers. They hunt and eat gophers if they find it around even when they have enough food because such action isn’t only about filling the stomach; they do it for the fun of it.

You may try a little experiment to confirm if cats eat gophers just because they’re hungry.

Place normal cat food around your cat and throw a gopher in there with them. You’ll be amazed to see how your beautiful pet will leave its food to hunt down the pest and may begin to feed on it. Cats are born hunters, and it is due to this instinct that most people keep them for pest control. Cats that live in the wild are taught how to hunt for survival by their mothers. However, cats that stay mostly indoors may lack all essential hunting skills.

As a result of this, if an indoor cat manages to hunt down a gopher, it might bring it to you uneaten because it doesn’t know what to do with it or how to kill it.

However, if your cat exhibits such a trait, you may train it to kill and eat gophers like its counterpart in the wild.

Is it ok for My Cat to Eat a Gopher?

Yes, There’s nothing wrong with your cat eating a gopher as long as the gopher is healthy and isn’t poisoned. None of the parts of a healthy gopher is poisonous; therefore, it is OK for your cat to feed on it.

Gophers are highly nutritious, just like other meat meals for gophers. They provide the pet with taurine, an essential amino acid. Other animals produce enough of this amino acid by themselves, but not cats.

The little pet depends on external sources to get its required taurine, and the best source is meat which can be obtained from gophers.

However, as good as it is for cats to eat gophers, they might get infected or poisoned if the gopher consumed is poisoned or infected.

This is a case of transferring the disease or poison from one animal to another. It is what the vet calls “transference.” Therefore, the gopher your cat will eat must be free of the following:

There’s nothing wrong with your cat eating gophers, but there’s something wrong with it eating an infected gopher. For instance, being a rodent, gophers are known to carry intestinal parasites.

Should your cat feed on a gopher with such a Parasite, it could be infected. Hence, if your cat often hunts gophers, you must deworm it at least twice a year.

If the gopher eats poison and your cat feed on it, your cat could be poisoned too. For example, strychnine, a common poison used in coating seeds to kill gophers, could kill your cat as well.

If the gopher eats the poison, it settles in its intestine before it decomposes.

If a cat feeds on such remains, it could pick up the poison while eating the intestine, and as such, it could be poisoned.

Strychnine is a powerful poison that will not only make your cat sick but it could also kill it. Therefore, it is OK for your cat to eat a gopher, but it shouldn’t eat a gopher in an environment where gopher poison is used. 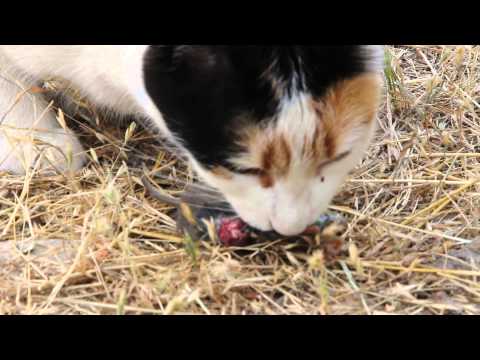 Will Cats Get Rid of Gophers?

Cats are good hunters; hence, they can hunt down all the gophers in an area and eliminate them all. Many people buy cats for the sole aim of hunting rodents, and they do wonders at it.

One of the most effective ways to get rid of gophers in the vicinity is to put cats in such areas. Being born hunters, cats can go after every single gopher they find until there are no more gophers or any other rodents in the area.

If there are lots of gophers in your area and you wish to hasten their elimination process, you could get more than one cat. That way, it becomes a competition between the cats, and each one will always want to go after the gopher first.

If more than one gopher appears simultaneously, each cat could hunt different gophers, thereby hastening the total elimination time.

What to do When Your Cat Catches a Gopher?

If your cat catches a gopher, you can take the gopher away from it if you suspect the gopher has been poisoned. However, if you think the gopher is healthy, then you can let your cat eat it

If your cat catches a gopher, you must first answer a question to know the right steps to take afterward. You should ask, “is the gopher healthy or not?”

Although answering this question might be challenging, you can answer correctly by examining the area where the gopher was picked.

For instance, if your neighbor uses gopher poison and your cat comes with a gopher, there are chances that such a gopher isn’t healthy and could have been poisoned.

In such a case, you should make your pet drop the gopher and contact a vet as quickly as possible; perhaps the cat has also ingested a portion of the poison.

If you catch your pet eating the gopher and you suspect it is poisoned, you should induce vomiting immediately by injecting Xylazine. However, it is better to let your vet do this to avoid complications.

On the other hand, if no one in the vicinity uses gopher poison, then there are no calls for alarm. You can let your cat enjoy the meal.

Related posts:
Can You Kill Gophers With a Pellet Gun? {What About a BB gun?}
Differences Between Gopher vs Mole: {Similarities & Differences}
How to Kill Gophers & Moles with Dry Ice: A Step by Step Guide
Do Gophers Come Out in The Rain? {Do They Like Water?}

Home » Rodents » Gophers » Why Do Cats Eat Gophers {Is it OK To Eat Them?}