Are you wondering if an ant can survive a fall from huge heights? Do Ants Take Fall Damage?

Can an ant fall off the roof of a building and survive? How will this ant recover?

Do ants fear heights? Why is understanding terminal velocity so important when it comes to learning more about how ants fall?

In this article, we’ll find out the answer to the question, “Do Ants Take Fall Damage?”

No. Ants will not suffer from falling. They will not take any damage and they will not die. Since ants are very lightweight, the amount of terminal velocity needed to create damage on impact is physically impossible for them.

It’s almost like they’re floating or imagine the weight of a feather hitting the ground. It simply doesn’t hold enough weight to sustain damage. Do Ants Get Hurt if They Fall?

It doesn’t matter if an ant is falling from a height of a tabletop or 5-story building, gravity is not going to be able to pull the end faster to the ground.

The landing will be much more gentle than an animal or human carrying a heavier load, thus an ant doesn’t get hurt if it falls.

Do Ants Get Scared When They Fall?

Due to being able to survive fall damage without any type of injury, an ant will never show any type of fear near of tall buildings or any ledges.

Enough research is done on the topic to conclude that gravity, heights or vertigo is not going to be an issue for an ant when it is venturing out to dangerous lengths to obtain food or seek shelter.

Will an Ant Die if You Drop It?

No and ant will not die when you drop it. An ant has a mass that is small with enough buoyancy to create drag while it is falling.

This drag ends up creating a floating effect before the ant even gets a chance to touch the ground. The landing will be soft and there will be no damage.

This is why you will notice an ant being able to fall from a great height, then continuing to walk like nothing happened at all.

A human’s mass on the other hand, is much larger and therefore we cannot achieve buoyancy at the same level or speed an ant can. We also have a faster terminal speed or terminal velocity of 120 mph compared to 3.9 mph of an ant. 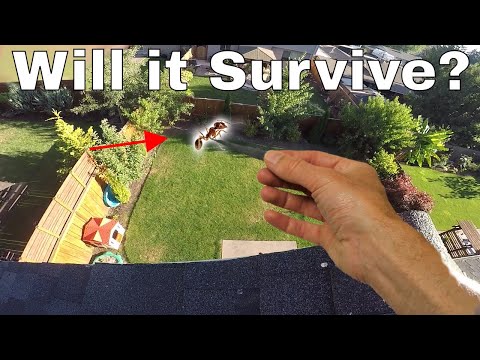 How Far Can an Ant Fall?

Although this test has not been performed, researchers have enough evidence to support that an ant will be able to survive. Ants are not going to sustain any damage from such a fall because of their buoyancy and slow rate of terminal speed.

Their final defense mechanism is their exoskeleton that acts as a hard shell. It is incredibly protective to withstand a fall from any height without any cracks or damage.

What Will Happens if Ant Falls off a Building?

Nothing will happen to an ant if it falls off a building. It will be just the same as falling off of a table. Maximum terminal velocity will be reach its limit about 3 meters into an ant’s fall. This is about 3.9 mph or 6.27kph.

At this speed, it’s not fast enough for an ant to sustain any damage when it hits the ground. The ant will softly land and begin crawling like nothing happened.

There would have to be more downward force such as wind or a vacuum effect to create an acceleration in terminal velocity.

This would add more weight to the fall and an ant would surely be able to die at this point. If there is no downward wind that is accelerating an ant’s descent, it will clearly survive a fall off of a building.

What Is The Terminal Velocity of An Ant?

The terminal velocity of an is about 3.9 miles per hour or 6.2 km per hour. This is the maximum speed an ant can reach during its fall. It is also referred to as terminal speed.

The terminal speed or velocity of a human is over 120 mph. If a human reaches this speed during its fall there is no chance we can survive.

An ant will never reach a point where the terminal speed or velocity reaches a point that is terminal or deadly. The landing will always be soft enough to spring up and crawl away without sustaining any damage.

There are countless videos like the one contained within this article. They show people conducting experiments or gathering evidence to support the claim that ants do not sustain any fall damage.

We may have thought that this is solely due to their hard exoskeleton, but it’s actually the rate of speed (terminal velocity) that is too slow to create any damage.

The ants land softly as they float milliseconds before touching the ground. The exoskeleton is an added bonus to prevent their organs from taking on any damage as well.

Related posts:
Why Do Male Ants Die After Mating? {Do They Work In The Colony?}
Do You Need a Queen Ant for an Ant Farm? {Will They Die Without A Queen?}
How to Get Rid of Ant Bites Overnight {13 Remedies To Heal Your Ant Bite}
Do Ants Eat Honey? {Honey vs. Sugar Explained}