Are you wondering if ants starve or get dehydrated? Will they survive without any food or water?

Do you have an ant infestation and wish to remove all food sources to get rid of them? This is a great prevention technique.

What if ants store their food and continue to survive for months? How Long Can an Ant Live Without Food & Water?

How Long Can an Ant Live Without Food?

Ants are able to survive 4-10 days without eating anything. The exact temperature of the colony, stability of the environment, their level of activity, and the amount of food storage they have remaining may dictate how long an ant can live without food.

How Long Can an Ant Live Without Water?

Ants need to find a water source within 14 days before dehydration sets in. Ants are able to extract water from food sources or from the ground.

Ants can absorb water from plants and take in moisture from the surrounding environment during their quest to find more abundant sources of food and water.

How Long Does It Take for an Ant to Starve?

The strength of the colony determines how long an ant can survive without starving. A strong colony can last 8 months or so before starvation sets in.

The evidence is based on scientists tracking worker ants. They noticed worker ants conserving their energy during periods where food was scarce.

The more food is that is available in their surrounding environment, the more worker ants will venture outside and forage for it.

Ants able to sustain long periods of time without collecting food after they have saved enough in storage. A single ant on its own without food may survive 4-10 days.

Do Ants Get Hungry?

The sensation of hunger that ants feel is more towards survival than simply consuming food. Ants are hungry to store food.

They survive by predation or scavenging on multiple sources of prey including plenty of other insects.

They also survive on seeds, but liquid sources of food can easily be absorbed and consumed at any period of time. This is why worker ants continuously stay on the move, collecting and consuming at the same time.

Do Ants Get Dehydrated?

Yes. Dehydration is more likely to occur to ants who are living on the ground compared to those on trees. This is because they can absorb moisture from leaves on trees to ward off dehydration.

The rain and dew keeps them continuously absorbing moisture. Ants may get dehydrated and die without any liquid source after a period of two weeks.

Carpenter ants can survive 6 months without food or water. They do so by resorting to cannibalism. 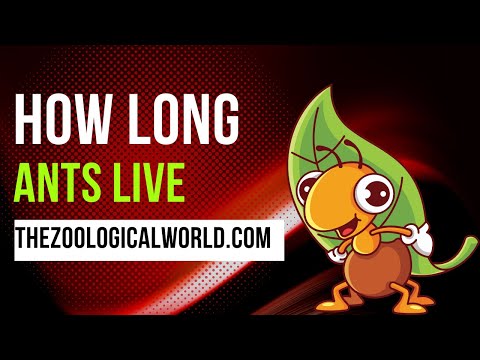 How Long Can A Single Ant Live?

Ants can live anywhere from 2 weeks for a male ant to 15 years for a queen ant. An ant that does not live in a colony may die in about 6 hours on its own.

Ants that live to protect their larvae or roam together in a pair, have shown the ability to survive for about 3 to 4 weeks.

What is the lifespan of an ant?

What Happens When Ants Run Out of Food?

When food runs low in an ant colony, the queen ant will actually begin rationing it out to her workers. The queen will not ration her portion however.

The worker ants begin to eat less food and reduce their level of activity. When all of the food has run out, there are only four to seven days left before the entire colony dies.

What Do Ants Eat?

Ants are scavengers and also hunters. The majority of their time is spent being opportunistic eaters looking for any bits that have been left behind.

Ants work together to take apart larger animals that are drying out or hidden under the soil. Ants are carnivorous, but they also enjoy feeding off of plants. Some ants like leafcutter ants are herbivores.

Can Ants Survive With Just Water?

Ants don’t breathe through a nose or any respiratory system like humans do. This means they have tiny holes called spiracles allowing them to breathe. These spiracles must to stay open without flooding.

This is why ants would not survive in water for too long. Ants need to absorb water from food sources. They also like to absorb food from liquid sources.

Water alone is not going to be enough to sustain an ant. Ants will not survive with just water. In about 4 to 10 days, they will perish if there are not any nutrients available.

How Long Can Ant Colonies Survive?

Ant colonies can survive for many years. The effort level of the worker ant is not to be underestimated. They are working to maintain food supply, care for the queen and her larvae.

The queen continues to mate with male ants who die off within days. The offspring they produce continue to keep the colony strong for many years. A colony without a queen ant will die off within months.

Stable colonies might even allow for the queen to create more queens. The colony could spread further apart or break off into multiple colonies. The cycle will continue to repeat until there are no more queen ants remaining.

What Happens When an Ant Colony Runs Out of Food?

When the entire colony of ants run out of food, they will try to live off their food reserves. If there is no more food available, the queen will stop rationing the food to her workers. She will live off of her fat reserves and eventually die.

Before this time, her eggs most likely turn into males if she can lay any at all. Males do not survive longer than a few days to two weeks. Some ants such as carpenter ants, will turn to cannibalism before allowing themselves to die.

Ants will not venture out as much when they are running out of food in order to save energy. They will scavenge on anything that is available from a wide range of edible options including any crumbs that we may leave behind.

Do Ants Feed Their Young?

Yes. The larvae of ants depend on the adults to feed them. Worker ants spend most of their time looking for food to nourish their larvae. They chew the food into a paste and give it to their larvae.

The food that larvae prefer would be aphids or anything that is sweet like sugar and water mixed together. The larvae are going to need time to survive until they are adults. This could take up to 100 days. Until this time, worker ants feed their young.

A fun fact to know is that none of these larvae are actually the offspring of the worker ants. They are acting as surrogate mothers or caregivers because the queen is the only real mother who actually gives birth to every ant in the colony.

Yes. Ant colonies have expansive chambers that are called granaries. This is where they store their food they have collected.

The queen ants and her larvae must be fed first. They must also have enough leftover to store away in order to protect the future of their colony.

These granaries are well hidden and deep into the colony to prevent getting wet from rain or overexposure to moisture and dew.

If the food reserves are spoiled, the ants will have to get rid of it before the bacteria or fungus become a risk to the health of their colony.

Ants may survive 4-10 days without any food. They may survive up to 14 days or longer without a water source because they can absorb moisture from the air or from plants and carcasses.

Ants are adapted to care for their colony over everything else. Their survival depends on the queen remaining fed first. Without her, the colony doesn’t stand a chance at surviving.

Removing food, sealing containers and cleaning up regularly after meals and snacks will ensure that ants will have no reason to hang out on your property, unless you wish to care for them in an enclosed ant farm.

Home » Insects » Ant » How Long Can an Ant Live Without Food & Water? {Do They Store Food?}