Have you ever been frightened by fast moving of cockroaches? Are you worried if cockroaches have teeth and can they bite you?

In this article, I will tell you about the structure of a cockroach jaws, and possibility of being bitten.

Do Cockroaches Have Teeth?

Cockroaches don’t have teeth in their mouths, but there are small sharp notches on the upper jaw, which perform their function. During chewing, juice enriched with special enzymes begins to be actively produced in the oral cavity.

Some kinds of cockroaches can bite even a human under some circumstances: lack of food, water, or cleanliness.

A bite can hurt and insert an infection into the wound. You need to beware of their bites. How Many Teeth Do Cockroaches Have?

Cockroaches typically have between 20 and 30 teeth but they are not what you would typically recognise as teeth.

The elements of the oral apparatus include:

In addition to the complex jaw, there is an organ similar to a tongue in the insect’s mouth. It helps to absorb liquid.

The process of biting in cockroaches is performed by mandibles, which resemble ticks with sharp notches.

With the help of mandibles, insects easily chop even wood. To control the upper jaws, there are two groups of muscles. Switching between which individuals regulate the bite force.

Will A Cockroach Bite You?

There are different opinions about the assertion or denial of whether cockroaches bite a human.

There are also known cases of cockroaches entering the ear and nose of a person, confirmed by otolaryngologists. However, whether they bite inside the cavities is unknown. 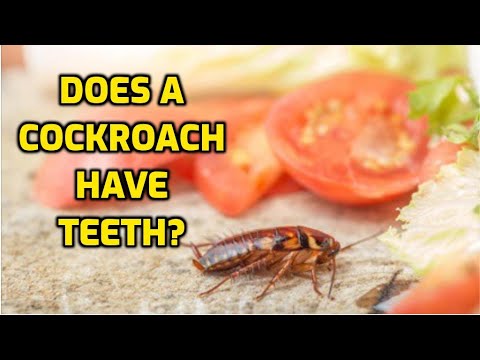 Does a Bite Hurt?

Yes, it hurts. Researchers from the University of Cambridge have found that the grip strength of the mandibles of American cockroaches is 50 times greater than their body weight.

The strength and duration of the bite, when using different muscle groups, vary from weak and short to strong and long.

Since the cockroach’s oral apparatus does not contain teeth, therefore it bites only the upper layer of the epidermis, tearing off its small particles.

At this moment, a person feels a pinch in a split second. At the same time, the larger the individual, the stronger the bite is felt. These insects can damage human skin in several places until they completely satisfy their need for food.

A characteristic feature is a bitten (gnawed) area of the skin, which is tightened by a crust. There may be a blister, erosion, abscess, and swelling. The wound itches and there is a burning sensation. It heals within a few days.

Looking to get rid of cockroaches? Did you know you can use baking soda to kill them? Take a look at this article I wrote about that.

Why Do Cockroaches Bite?

The main factor is the inadequate sanitary and hygienic condition of the room, which leads to an accelerated reproduction of insects and the emergence of difficulties in finding water and food.

Most likely, cockroaches will make raids to where a person sleeps, who, having settled in a dwelling, feel at ease in it. No one and nothing bothers them, the fight against them has not yet begun, but at the same time, they are experiencing problems with access to food and water.

The omnivorous nature of cockroaches allows them to find food, but the lack of liquid for insects is disastrous.

Although cockroaches can live long enough without water (up to 7 days), they will definitely “develop” new areas, look for new sources for their food.

To get to the necessary moisture, cockroaches are forced to scrape the keratinized layer of the skin. They also act in search of food.

2. Crumbs in The Bed

The bed attracts insects for another reason, this should be taken into account by lovers of a snack in bed. Crumbs left in bed after eating can provoke the appearance of cockroaches there. Leftovers can also be on the body of a person who did not eat in bed.

This is especially true for young children. The hands and lips of the baby often retain parts of his food. In order not to provoke a cockroach, you need to follow basic hygiene rules, wash your hands, and wash your child after eating and before going to bed.

3. Increasing the Number of Insects

Another reason for the appearance of a cockroach in the bedroom is an overgrown insect colony, which leads to difficulties in finding food.

Systematic control of harmful insects, the use of preventive measures that will not allow them to multiply with impunity, will allow you to spend nights without fear of being bitten by cockroaches.

Do Cockroaches Chew Their Food?

Yes. The salivary glands are located in the mouth, which secretes saliva designed to soften and moisten food before swallowing. It is noteworthy that what is eaten will be partially digested already in the insect’s goiter, and the stomach will take care of everything else.

Due to the muscular structure, it seems to “grind” food, then sending it to the middle intestine, then to the back intestine, and the excretory system. The intestines of cockroaches are inhabited by bacteria and fungi, thanks to which the insect can digest even inorganic compounds.

Do Cockroaches Have Teeth in Their Stomach?

Yes, there is no need for a cockroach to chew food too thoroughly. In the part of the anterior intestine located just behind the mouth, there is a row of teeth that will certainly thoroughly grind what is swallowed in a hurry.

Cockroaches do not have a urethra, so both feces and urine are excreted through the anus.

Do Cockroaches Have Fangs?

No. However, a cockroach bite can cause an infection to enter the human body since when combing, the skin is injured and the wounds remain open. Given the fact that these pests live in the dirtiest places, they can carry helminthes and pathogens of dangerous diseases, such as dysentery and tuberculosis, on their bodies and paws.

Related posts:
How to Prevent Cockroaches in Wardrobe {9 Ways To Keep Them Away}
How Quickly Does Baking Soda Kill Roaches {Does It Even Work?}
Can Cockroaches Get High & Drunk? {Find Out Here]
Do Cockroaches Make Noise at Night?

Hello, I'm Jason. I have 8 years of experience in dealing with pests. I try to provide you the best information that'll help you to make the pest control process easy & affordable