Raccoons are pests in our neighborhood and we have made a lot of effort to prevent them from opening up our garbage bins.

Unfortunately, raccoons will find plenty of animals around the park or in the pond nearby. My neighbors and I were having a conversation the other day and we asked, “Do Racoons Eat Snakes?

Are raccoons afraid of snakes? What animals do raccoons eat?

In this article, we will elaborate, explain and discuss the topic concerning, “Do raccoons eat snakes?”

Yes. Raccoons are killers, scavengers and foragers. They will go after any type of animal that is an easy kill for them. They will generally hunt animals that are easier to catch such as snails or clams.

Raccoons with also plenty of other animals including the following:

Have you ever seen a raccoon hunt and kill a snake? They might be doing it as a fight or flight response and in many cases they are the winner. In other cases, both animals will retreat with no victor in sight.

What Are the Predators of the Snake?

Snakes have many potential predators. The reason being is because snakes are easily seen from above from birds of prey and their flexible bones make them easy to consume.

It is easy for many animals to quickly devour a snake. A snake that is non-venomous will have a hard time defending itself. The following animals are predators of snakes:

What Animal Is a Raccoon Afraid Of?

Raccoons in our neighborhood seem fearless and are not afraid of us at all. They like to stay away from their natural predators, but do not consider humans to be so.

In the wild raccoons usually keep their distance from the following animals:

A raccoon is a forager, scavenger and a hunter. They would like to find any easy meals including whatever is available inside our trash cans. They will be found near the edges of water looking for:

They also enjoy an omnivorous diet balanced off with:

Raccoons are not excellent hunters, but they are able to catch mice, rats, squirrels and defend themselves against snakes. A snake is an easy meal to digest once it has been hunted and killed. 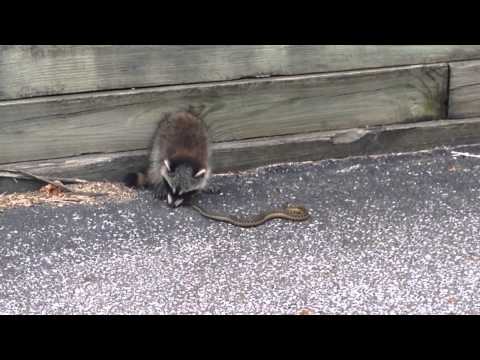 Do Raccoons Eat Other Animals?

Yes. Raccoons hunt and devour many animals, but they also enjoy eating plant matter too. They will eat trash and just about anything else they can find.

The common foods for raccoons are known to include all the following:

There are plenty of animals that kill snakes very easily. They are usually flying from up above. Many birds of prey such as owls or eagles will will fly after snakes and swoop them up.

There are also other land animals that have developed a taste for snakes. Some of the animals are listed below:

What Do Raccoons Hate the Most?

Raccoons love to eat,  but they would prefer to do so in the dark. If we shine a light on a raccoon, they might be put off by it. They also hate strange loud noises.

If you can keep an ultrasonic noise device operating at a high frequency, raccoons will be deterred by it. Raccoons hate loud sounds, bright lights, and the smell of ammonia.

Ammonia is similar in their olfactory senses to predator urine. This is why leaving out a saucer full of ammonia or a rag that is dipped in ammonia near where raccoons like to enter your property will deter them.

What Attracts Raccoons To Your Yard?

Raccoons like to come to your yard because they are searching for food and shelter. If you are leaving garbage bags or garbage cans open, you are inviting raccoons to enter your property.

If you leave bird seed or a bowl of pet food lying around, raccoons will attempt to steal it.

Compost piles, chicken coops, climbable trees and produce in your garden will also attract raccoons to your yard.

When food is scarce and there is no other option available, raccoons will expel more energy to try to catch faster rodents such as squirrels mice or rats.

Because raccoons are not natural hunters, they would rather scavenge on the corpses of dead squirrels, rabbits, mice or rats instead.

Raccoons have an incredible digestive system that allows them to ingest rotting the king food or even heaps of garbage in compost that we leave behind.

Raccoons will fight cats, but it is very rare for them to eat them. If a raccoon finds a kitten without its mother, it may choose to attack and feed on it.

Raccoons are looking to eat chickens rabbits and many types of babies or eggs. They are opportunistic feeders who are not picky at all about what they are eating.

Yes. Raccoons will eat smaller rodents such as mice or squirrels. They are not the quickest hunters and will make the effort to catch a mouse under their claws if the opportunity presents itself.

4. What Animal Kills the Most Snakes?

The biggest killers of snakes are usually the smallest or the ones that are hardest to see. We are thinking of large land animals, but they are actually the birds-of-prey from up above.

Owls, Hawks, Falcons, Herron and Eagles are very likely predators who are known to eat the the highest proportion of snakes in the animal kingdom.

Related posts:
How To Repel Raccoons But Not Cats and Dogs {This Will Surprise You}