Do you ever wonder if a wasp can actually get angry? How long do wasps stay angry?

How do you stop angry wasps and what do you do when a wasp is chasing you?

Whenever there’s a cartoon image of a bee, it’s usually cute or friendly, but wasps on the other hand, would be portrayed as malicious, angry or vengeful.

In this article, we will find out how long do wasps stay angry.

How Long Do Wasps Stay Angry?

Wasps get agitated, annoyed and angry when they feel threatened. If you are waving your arms and trying to shoot a wasp away, you will only agitate it further. A wasp will protect the nest at all cost with its stinger.

Wasp will stay angry as long as you continue to flail your arms or try to attack it. If you leave them alone, do not disturb the nest, wasps will resume their activity and ignore you once again.

Do Wasps Actually Get Angry?

Yes. Anger is an emotion that we have created as a word in our lexicon. We can attribute this word to wasps that feel:

If they feel that we are threatening their nest, wasps will become aggressive and angry to the point at which they will decide whether or not they need to sting us.

Unfortunately, wasps can sting and remain alive, giving them the option to do so without ending their lives. Approaching a wasp’s nest during the day will provoke them even further.

This is when they are most active. If you keep a safe distance away from a nest, they will not have to defend their territory and will not be provoked to become angry or agitated.

How Do You Stop an Angry Wasp?

Stopping an angry wasp means you need to prevent provoking it or its nest. You can take some precautions when you are near angry wasps and prevent yourself from becoming the object of their negative attention.

Here are a few tips to stop an angry wasp:

Wasps may be fooled easily to think that you resemble a flower when you are wearing multi-colors. Once they get near you, back off and get as far away from the nest as possible.

At about 100 feet are more, wasps will return back to their territory to defend their nest. They should stop chasing you or lose there anger towards you. 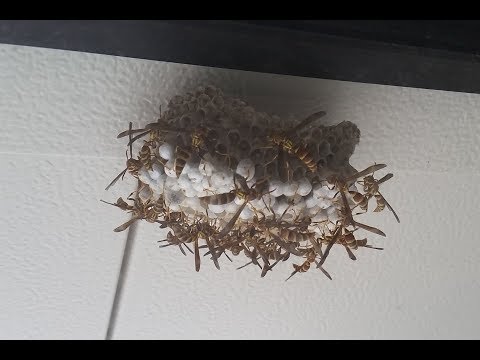 What to Do When Wasps Are Chasing You

Wasps should not be chasing you for no reason. If you are in a situation where wasps or a swarm of them are after you, run in a straight line. Clear a distance of 50 to 100 ft. Get away from their nest.

Wasps do not want to venture further away than this distance because they would leave their nest open to attack. It is their natural instinct and defense mechanism to defend their nest more than anything else.

This is why if you are being chased by a wasp, do not flap your arms or stand your ground. Let them have this territory because they have spent months creating the nest.

Eradicating their nests altogether is another subject that requires professional help, smoke, chemicals and many other types of solutions.

Does Killing a Wasp Attract More?

If you kill a wasp, you may end up getting the rest of them even more angry at you. They may become more aggressive. Do not confront these wasps head-on or you will lose in the end.

One wasp can attract further wasps to come at you. If you are near one of their nests, and you see one wasp, you are bound to see more.

You will not win this fight because they will continue coming at you. The best thing to do is run in a straight line away from the nest to about 50 to 100 feet because killing a wasp may attract more. In our personal opinion, wasps do hold grudges. If you try to kill a wasp and you miss, the wasp may find a place to hide for a moment or two and wait for you. When you get close, a wasp could make contact with you or dart directly at you.

They will target you and sting you. They can do so without worry of being killed because they do not lose their stinger and can have no reason to think twice about stinging again in the future. This is what separates wasps from bees that die after they sting.

There are many reasons why wasps can get angry at humans or other animals. Once they get annoyed, they will be relentless in their attack. They will get angry when they feel threatened or if their nest is at risk.

If you wave your arms and try to get rid of them this way, you will only make wasp angrier.. The defense mechanism will kick in and they will release pheromones to signal to others wasps to get out of their nest and help them out.

Stinging you helps them feel safer. They can do so repeatedly without getting hurt. As long as their nest or their own personal well-being is threatened they will continue to remain angry.

Related posts:
Does Citronella Repel Wasps? {Which Scents Do They Hate?}
Why Are Wasps Attracted to My Car? {How To Remove Wasps In Cars}
Where Do Wasps Go in the Winter? {Knowing This Will Save You Next Spring}
Can You Use Wasp Spray Indoors? {What Will Happen?}