Do you believe that 1 in 4 houses has a can of Lysol lying around? Well, Lysol is a 4 in 1 cleaner that can freshen homes but also kill insects on contact.  But, the question remains, “Will Lysol kill Wasps?”

What are the active ingredients in Lysol that can kill wasps? Is Lysol just as effective as regular insecticides?

In this article, you will find out the answer to the question, “Will Lysol kill wasps?”

It contains household cleaning chemicals such as ethanol, hydrogen peroxide, benzalkonium chloride and potassium hydroxide that will suffocate wasps within seconds to minutes.

Stand three feet away from a wasp and aim a Lysol can directly at them. If you are aiming at a wasp nest, make sure you have plenty of protection on.  Do not leave your skin exposed. Wasps tend to stay near their nest during dusk and dawn.

What Are the Active Ingredients in Lysol?

The way that Lysol’s active ingredients work for killing wasps is by clogging their breathing apertures. These chemicals can seep into the pores through their exoskeletons and stop their breathing almost immediately.

What Are the Best Ways to Kill Wasps?

Throughout our research, experience and first-hand knowledge, we’ve deciphered the best ways to kill wasps.

We cannot put Lysol spray on this list. We know that Lysol can kill wasps, but it is not as effective as the following methods below:

Another dangerous method of killing wasps is to place a lighter in front of an aerosol spray can and attempt to burn the entire nest. We cannot recommend this method because of all the risks involved.

Wasps are no joke. It’s best to contact an extermination company if possible. They will determine the extent of the infestation and find out if there is more than one area where they are intruding on your property.

How Will Lysol Kill a Wasp?

Yes. Lysol will kill a wasp because you are clogging their pores with chemicals when you’re spraying it directly at them. Spraying Lysol on the wasp should kill them, but you might be in for an angry attack.

If you’re standing too close or your skin is exposed, you are leading yourself into a line of fire. Wasps can sting and still remain alive. They can live to fight another day. They can warn others in their nest to attack you as well.

It is up to you to decide if you would like to take the chance of spraying an entire nest with Lysol. We do not recommend that. If you see one straggler wasp, you make spray it with Lysol and effectively kill it. 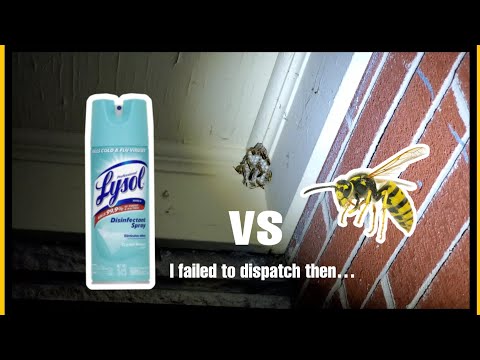 How Does Lysol Work?

Lysol works as a cleaner, freshener and a germ or insect killer in an aerosol can. The liquid inside it is condensed and it comes out in gas form. The two ways to use Lysol to kill a wasp are as follows:

Both methods rely on you to spray perfectly and directly at the wasp. Your attempt to saturate it must work or the wasp may be able to flee.

Aim at the wings or directly on the body to poison, drench, drown and suffocate this flying pest.

How to Use Lysol Spray to Kill a Wasp?

Before you attempt to kill a wasp with Lysol, make sure that you are completely covered up with long-sleeve clothes and no visible skin.

Grab a can of Lysol in one hand and a fly swatter in the other hand. Pros And Cons of Using Lysol to Kill Wasps:

Will Windex Kill a Wasp?

Yes. Windex will kill wasps the same way Lysol will. It will take a few minutes for them to curl up and die. You need to aim the contents of the Windex bottle directly at the wasp and hope to suffocate or drown it.

The liquid will end up all over their wings and inhibit their ability to fly away. The chemicals in Windex will fill their breeding apertures and cause them to suffocate internally.

Windex and Lysol are effective methods of killing wasps when there is nothing else handy. If you have too many wasps or an infestation such as a nest is visible on your property, contact a professional extermination service to handle the risk for you.

An entire nest of wasps will not be killed by Windex alone.

Related posts:
Does Soapy Water Kill Wasps & Hornets? {What About Yellow Jackets?}
Can You Kill Wasps With Deodorant? {Be Warned of the Consequences}
Will Brake Cleaner Kill Wasps? {How To Kill Bugs With Brake Cleaner}
How Long Will Peppermint Oil Keep Wasps Away {This Will Surprise You}