Can you kill Gophers with a pellet gun?

In this article, I’ll cover everything you need to know.

Can You Kill Gophers With a Pellet Gun?

Yes. You can kill gophers with a pellet gun. They are tiny animals, typically between 5 to 14 inches. Pellet guns exert enough force capable of killing this little pest.

A .177 pellet gun is powerful enough to kill rodents like gophers. However, the shot must be taken at a reasonable range. Otherwise, the gopher might escape. .177 caliber is the smallest diameter of pellets commonly used in air guns. Though the smallest, this caliber exerts enough force to take down a gopher.

If you plan to hunt gophers using the .177 pellet gun and you want it dead with a single shot, there are three things to do: 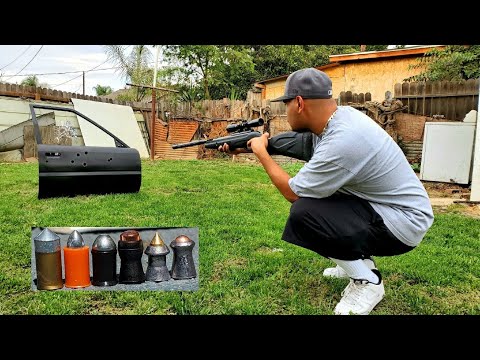 3 Steps To Kill Gophers With a Pellet Gun

1. Lure the Gopher Out

Gophers stay down in their hideouts for long and only come out to engage in a few activities. However, there are a couple of things you can lure them with to keep them on sight long enough to shoot at them.

They love carrot sticks, apples, celery sticks, and peanut butter. You can keep any of these close to their hole.

Like other squirrels, gophers have a high sense of smell; thus, they will perceive these items on time and get out of their hides to feed.

You shouldn’t stay too close so that you don’t scare the squirrel off. You also don’t want to be too far of a  distance away, or the shot won’t hit the gopher. An average .177 air rifle can hit a target at about 400 yards (366 meters).

However, you don’t have to keep such a far distance. 50 to 75 yards is a safe distance to shoot and kill a gopher with such a rifle. You can as well shorten the distance for a clearer view. This is also good if you can maintain an invisible position so as not to scare off the squirrel.

Headshot is the best to kill a gopher using a .177 pellet gun. Since this pellet has a very small diameter, it doesn’t exert high force on impact; therefore, you need to target the right part where such impact can kill the gopher.

If you aim at other parts of the body like the leg, the gopher could still manage to escape, and if that’s your first time using a .177 pellet gun, you might think it is incapable of killing the tiny mammal.

If you shoot the leg, for instance, it could struggle to crawl into the hole, and you may find blood traces, indicating it was hit but survived.

Therefore, regardless of the gopher’s size, a .177 air rifle will bring it down if shot in the head and at a safe distance.

When using a low-speed pellet gun like the 600 FPS, one significant factor must come into play if you desire to make an impact and kill the gopher.

The factor here is the distance. You should be closer to the gopher as much as you can while maintaining your invisible status.

Aiming from 25 ft away is considered good enough to kill the gopher with a headshot, especially if you use heavy pellets. If you shoot a 600 FPS pellet gun from a farther distance, even if it hits the squirrel, it may survive the impact because the force on impact will be low.

To make a better impact, you can opt for pellets heavier than a .177 and shoot from a safe distance. That way, you have three things to your advantage — pellet weight, distance, and pellet speed.

If you consider all these and aim at a gopher, you can kill the gopher even if you aim for its body and not the head.

It only becomes better if you aim for the head with a 1000 fps pellet gun. However, if you shoot its body, the force on impact will be enough to cause bone fracture if the gopher is an adult. Such fracture should prevent the gopher from moving and you can pick it up.

What is the Best Pellet Rifle For Gophers?

Tactical Crusader Break Barrel .177 Caliber Pellet Rifle is the best Pellet Rifle for gophers. It owes this to its affordability and “good enough speed,” and exerting a tremendous force on impact.

The Tactical Crusader Break Barrel .177 Caliber Pellet Rifle is ideal for hunting gophers and other rodents. It is made of wood and heavy-weight metal and is easy to grip. You also don’t need a lot of technical skills to use this rifle.

Its design includes an adjustable rear sight and a front sight that makes aiming easier. You can also pair the gun with a scope. This pellet rifle can shoot at 750 feet per second, enough to kill a gopher with a headshot.

Can a BB Gun Kill a Gopher?

Wait for the right moment and aim in between the ears of a gopher. If you hit the plump body of a gopher, you may not be able to kill it with a BB ammunition.

We recommend you take some target practice in order to improve your shot before the moment arrives. Once you see a gopher, you may tense up. Take a deep breath, aim your BB gun and fire.

Home » Rodents » Gophers » Can You Kill Gophers With a Pellet Gun? {What About a BB gun?}