Are you hearing strange animals noises outside your window? Could it be a possum? What Does A Possum Sound Like?

In this article, we’ll look deeper into whether or not you are hearing possums and how to better identify their noises.

Possum sounds range from clicks, hisses, growls and screeches depending on the time of day and the mood they are in.

Over the course of scientific research, there have been a total of 18 different types of possum sounds. Most of the time, these sounds are similar to a type of clicking noise.

Other times,  you may hear hissing or growling. Each sound that you hear indicates a different mood or reason for a possum to make that noise.

It could be due to mating rituals, fear or anger. Here is a list of the types of sounds you may hear coming out of a possum: What Does Each Possum Sound Mean?

Although we can’t tell exactly what the language of a possum means in direct English translation, we can see that it’s advanced enough to showcase more than a handful of noises for different occasions.

Aggression or fighting noises will sound louder and could be more of a growl, his, chatter or even a scream.

Funny sounds like zook-zook or shook-shook including gentle clicks could indicate that a possum is trying to mate or is in a good mood.

Baby possums make softer noises due to their vocal cords not being fully developed. Sometimes it sounds like they are sneezing but they are truly just trying to get the attention of their parents.

A baby possum could be as small as a fingernail or a few inches long. During this time, they make noises that are hard to hear from far away.

Baby possums will try to mimic the sounds of their parents unsuccessfully. This doesn’t mean that they will give up.

They will continue to adapt, mature and develop their communicative abilities. Sooner or later, they will click, hiss, growl and grunt like their parents.

What Type of Noise Does a Possum Make?

The clicking noises that you are hearing outside may in fact be coming from a possum. These clicks are the attempt of a possum to attract a mate. Sometimes it’s a hiss or growl when a possum feels that there is a threat looming nearby.

Baby possums are trying to make sounds like sneezes when they’re trying to capture the attention of their parents. They may sound like, “choo”.

Most of the time you’re going to be hearing variations of clicks when a possum is busy with daily activities. Any louder hisses or growls could indicate stress.

An American opossum usually makes a sound of a low growl when it is threatened. Usually the sounds you hear are more associated with clicking or hissing.

They are not only involved in rearing their young, they are trying to go unnoticed with larger predators nearby. Sometimes the clicks help to attract the attention of their offspring.

Other times you may hear sneezing sounds that are coming from younger opossums. Most of the times opossums are quiet in order to remain hidden from view or from the sensitive hearing capabilities of predators such as:

Why Do Possums Scream at Night?

Have you heard strange screaming sounds coming from outside? Did you know that possums also scream when they are active at night?

Some may say that it’s more of a screech, but this high pitch can definitely resemble a scream. Possums may create such a loud noise to warn others to stay away from their territory.

They may also make the sound of a screech or scream when they feel threatened. Overall, a possum would like to go unnoticed. The screech would only happen when absolutely needed in case of danger, threat, fear or stress.

Possums are active after dark; hence, they are very likely to make sounds during the night. If you tend to hear the possums making noises at night, take into consideration the following three factors: 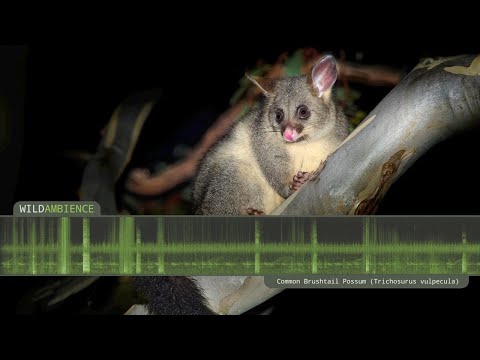 Are Possums Quiet or Loud?

Possums make noises when they are looking for a mate or when they feel threatened. A single, lonely possum usually is quiet. This is because this possum is vulnerable and would not wish to reveal itself.

This pest is silent when it is alone. If you’re hearing loud hissing or growls, it may be because there are predators nearby and the possum can be loud enough to try and frighten them.

If a larger predator cannot see the size of a diminutive possum, the smaller pest can try to make itself sound bigger than it actually is.

Possums rarely try to make noises that are audible. They are mostly docile and aloof, but can get aggressive when they feel threatened.

They have a range of noises with clicking being the most common. Sneezing sounds are likely coming from baby possums.

If you see a possum around your residence, in your garage or basement, do not try to fend it off on your own. Call animal control, a pest helpline or a critter service center to help you get rid of the possum.

Related posts:
Rat vs. Possum {12 Ways to Tell the Difference}

Home » Rodents » What Does A Possum Sound Like? {How To Easily Identify Them}