Are you looking to employ a rat killer on your property? Are Ferrets Good at Catching Rats? Why are ferrets still used to hunt rats when there are so many other pest control options? Do rats fear ferrets?

In this article, we will find out more about these friendly and common pets for families that can suit up and become fearless killers of rats or other rodents.

Let’s see. Are ferrets good at catching rats or do the risks outweigh the rewards?

Are Ferrets Good at Catching Rats?

Ferrets are excellent rat hunters. They have the ability to use their slinky and agile bodies to cram and squeeze into tiny openings where rats think they are safe. Ferrets can be taught and released to catch and kill rats, but there are always risks.

The ferret can be badly injured during high speed rodent chases. They can also catch fleas, ticks or harmful bacteria and diseases from rat encounters.

If this ferret is your family pet and cuddles up with you in the home, look for another way to keep rats away such as ultrasonic noise devices or scent repellents like eucalyptus and peppermint oil. Can a Ferret Catch a Rat?

Oh yes. Have you ever seen a ferret unleashed on a rat? You can be assured that this weasel or ferret will do its best to squirm and squeeze into tight spots to catch that pesky rodent.

Hopefully, a ferret’s thirst for the hunt doesn’t cause it to injure a limb or body part in the process. Another risk is the chance that the ferret can catch diseases, hantavirus, fleas and ticks.

Ferrets can be trained to chase rats into traps. They can also catch mice, rabbits or other rodents.

Rats fear the sign of predators and threats in their territory or near their colony. Rats can be deterred from going anywhere near the smell of larger hunters such as ferrets.

They can smell the urine of a ferret and be deterred from entering this location or property. Using ferret urine can be useful to keep a boundary between your property and rats who wish to enter.

Will the Smell of Ferrets Keep Rats Away?

Rats hate the smell of predator urine. This is why it is sold in stores. You can buy fox urine or plenty of other types. If you have a ferret, you may wish to save some of the urine and spray or drop it in locations surrounding your home.

Rats will be repelled from the smell of ferret odors such as feces and urine. They not wish to enter areas that contain the scent of: 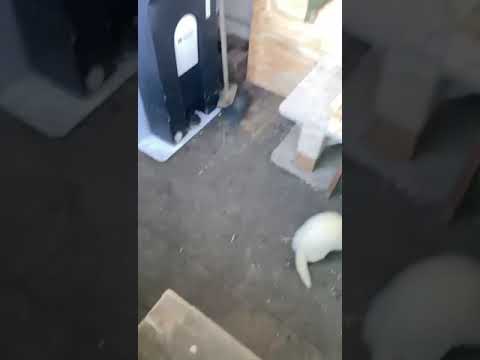 What Animals Are Good at Catching Rats?

The ferret should be included in the list of animals that are great at catching rats. You can look to the wild and start from the top to mention mountain lions or bobcats who can snack on rats in between larger kills.

Birds of prey will go after rats and scoop them up from higher altitudes where rats climb up for safety. They don’t look up enough and find themselves scooped up from flying hunters.

Snakes, foxes, weasels and cats will sneak up on rats and kill them as well.

Why You Should Not Use A Ferret to Catch Rats

Rats carry multiple diseases or harmful bacteria. You do not want your favorite animals carrying a rat in their mouth and transferring all sorts of potential illnesses

The list can be huge when you think of all the possible diseases and parasites rats can possess. Don’t allow your ferret to get sick, get bitten or scratched . Contact with blood, saliva or other fluids from a rat can easily infect a ferret.

Can You Use Ferrets To Catch Rats?

We don’t need to get in the way of nature. This has been happening for centuries. Ferrets hunt and kill rats. Do you want ferrets to do this for you?

Will they protect your property from rats? Sure they will. Just don’t go near a ferret anymore that may carry illnesses associated with rats. This is the risk you have to take.

A domestic indoor ferret will go out and kill a rat for you, but they may return injured or sick. Ferrets can consume the entire body, hair, organs and bones of a rat. The best bet would be to repel rats with ferret urine instead of releasing your pet on a rat. Are Ferrets Cousins of Rats?

It is a misconception that rats and ferrets are related in any way. Ferrets are not rodents. They belong to the Mustelidae family. The cousins of ferrets in this case would be:

A ferret has no desire to preserve the life of a rodent. They are happy to catch any rats or mice around your property if you wish. If you overfeed a ferret and keep it plump and cuddly, they will not care to hunt rodents anymore.

What do Ferrets Eat?

Ferrets are omnivores and opportunistic feeders. They can snack and forage on many items until they hunt and kill a rodent or other animals for a feast.

Meaty foods are their favorites. They can ingest organs, bones, skin, feather and fur. Since their metabolism is very quick and they don’t take long to digest food, they eat feast effectively without a fuss.

Keep fruits and veggies at a low and concentrate more on a carnivorous bowl of food for a happy and healthy ferret.

Ferrets will not attract rats. They will repel them. Ferrets have a stronger odor associated with them compared to domestic cats or dogs. This is dependent on many factors, but rats can pick up on the scent of a ferret and wish to have nothing to do with it.

Ferret feces or urine on your property might be enough to keep rats away. A study in 2008 concluded that rats release a stress hormone when they come into contact or smell ferrets. It is fair to assume the opposite is true and ferrets do not attract rats. Yes. Ferrets will kill rats or will keep them away. They are hunters belonging to the Mustidae family and will stop at nothing to kill a rat for you. You can reward your ferret with a better treat as you train it to chase a rat into a trap instead.

This way you can reduce the chances of a rat passing harmful parasites or illnesses onto the ferret. A ferret would go as far as squeezing its slinky and long body into rat burrows and holes to catch a rat.

Many ferrets have been lost this way when they venture too far and lose their way back or choose not to return.

Hunting with ferrets is a traditional activity from England that proves the relationship of this animal with humans going after desired targets such as rabbits, mice or rats.

Ferrets and dogs can also hunt together. They have been employed together to sniff out and kill hundreds of rats in a single day when infestations were at their worst.

Unfortunately, times have changed in ways where ferrets are at risk from the following when pursuing their hunt. Consider the following risks:

Pest control poisons, pesticides and other chemicals are located around our yards or surrounding lands. Ferrets coming into contact with them poses a risk to their health.

Fleas and other parasites

Fleas, ticks and bed bugs could transfer over to your ferret who catches a filthy rat. Rat fleas were part of the spread of the bubonic plague in the 17th century. Your ferret could also catch or spread tick fever or Lyme disease from rats.

Rat-bite-fever, hemorrhagic fevers affecting the lungs and kidneys or salmonellosis could all be transmitted from a bite. The injury could also become fatal. These are all very good reasons to prevent a rat infestation.

Many pet ferrets are well fed now and taken care of by humans who enjoy their company. They are docile to us and love to be fed constantly.

As long as we are supporting their diet and giving them shelter, we are reducing their thirst for hunting a rat. The risks involved outweigh the rewards to employing a ferret as a rat hunter. Use repellents including ferret urine to keep rats away, but keep your ferret out of the fight to get rid of rats.