Chipmunk droppings look similar to mouse & rat poop. Therefore, a lot of people often get confused between the droppings of these rodents.

Chipmunk poop is between 1/2 to 3/4 inches in size, typically quite firm and oblong in shape. The colour is usually dark brown, but this can change depending on the chipmunk’s diet.

Today, you’ll get to know about how chipmunk poop is different from rat poop. You’ll also see a few pictures of their droppings. So, let’s get started. Below I will go through what the poop looks like and how to identify it.

There are many animals that have similar feces like rats, mice, squirrels, voles, and bats. But, the droppings can change because of their health and diet.

So, if you try to identify the chipmunk feces by just comparing them with pictures, then it can be difficult to find. Check this picture of poop that is published by icwdm.org. Generally, in appearance, chipmunk scat is closely related to mouse poop. But, the size of feces is often larger than rat or mice poop.

You can say it’s approximately ¼ inches or more. Their droppings are generally hardened than the mice’s poop. The size generally stays between ½ to ¾ inches.

The droppings of a chipmunk is going to contain what it consumes. You’re going to know a chipmunk’s recent meal when you closely inspect it.

If you’re looking from a distance, you may mistake these droppings to another rodent like a mouse, rat or squirrel. You can say they are oblong and small or simply just pellets that taper on the ends.

The truth is that this feces resembles something that is hard, dark and elongated like large beans. You may also see from the pictures above and below that these poops closely resemble that of many other living creatures, including ourselves.

Is chipmunk poop larger in size or length compared to rat poop? Actually, no. On average, rat poop is larger that the average length of 1 centimeter for chipmunk poop.

Both types of poop should be avoided and are known to carry bacteria. Rat poop may resemble raisins or coffee beans and also a longer grain of rice.

If you notice something like this on the ground, do not mistake it as dropped food and pick it up with your hands. Sweep, spray and wipe.

Chipmunk poop looks similar to mouse poop but chipmunk poop is slightly larger in size and typically darker in colour.

Initially, chipmunk feces and mouse droppings may look similar. But, if you take a closer look you’ll see that chipmunk poop are slightly larger in size as compared to mouse or rat poop.

Below is a video that shows you what chipmunk droppings look like. 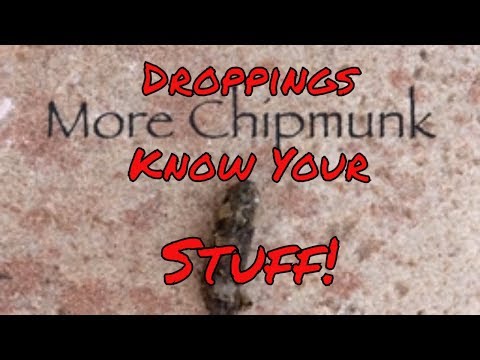 This image of rat poop is uploaded on reddit. Take a look at it.

While the color and appearance of the droppings may look similar or different, it depends on the health & eating habits of the rodent. Now, by looking at the pictures of chipmunk poop and rat poop, you can guess about the rodent in your property.

How Do You Clean Chipmunk Poop?

Chipmunks look cute, but their droppings can be very toxic and dangerous to humans. The air bubbles which are present around the chipmunk feces can contain spores that may contain bacteria and transferable diseases.

So, when you attempt to clean chipmunk poop, make sure you have the proper clothing, containing gloves & a dust mask.

What To Do If Chipmunks Are Present?

So, you’ve successfully identified the chipmunk scat, and you’re sure that they are present on your property. Then, what do you do now? Should you use home remedies? Home remedies are not reliable.

You can find many people on the forums talking about how they used this or that home remedy and it worked. Some remedies are tried & tested like antifreeze. Yes, antifreeze really and effectively kills chipmunks.

If you want to deal with them by yourself, then you should try traps. The chipmunk traps are very effective, and you won’t get a bad feeling because traps don’t kill these little animals unless you use a chipmunk killing trap.

If you want more information about the traps, then you can find in another article in which I have shared some of the top-performing chipmunk traps, both for catching and killing purposes. I’m recommending traps because they’re humane, easy to use, and budget-friendly.

Recently, I purchased the Kensizer Live Cage Trap for Chipmunks, Squirrels, Rats, etc, and I was surprised to see their price. It was way less than I expected.

Do You The Need Help of a Professional?

In most cases, you can get rid of chipmunks by yourself. You just need a good chipmunk trap like Gingbau Live Chipmunk Trap which is effective and cheap. But, if you are seeing a lot of chipmunk poop in your area, and you’re not able to get rid of them by yourself, then hiring a good Pest Control Company is the best choice.

Catching chipmunks can take a few weeks if you are a complete beginner and I guess, you’re a beginner, you don’t know whether to place the trap, how to adjust the bait, amount of bait, what type of bait, etc.

So, taking help of a Pest Control Company can cut down the extra few weeks to just one or two days. If you want to take the help of an exterminator, then do not just hire an exterminator that you heard of

Take quotes from multiple companies, then decide which is better.

Sometimes, it can be difficult for a normal person to identify chipmunk poop vs mouse poop because the feces can change according to the diet and health of the rodent. But, if you find difficulty in it, then you can take the help of any professional.

After finding the presence of these rodents, make sure to use traps. In the detailed article about chipmunk traps, you can learn more. So, have you identified the droppings? Let us know in the comments section.

Home » Rodents » What Does Chipmunk Poop Look Like? {How To Identify With Pictures }