Have you ever seen a fox hunt and kill another animal? Do foxes eat squirrels?

I’ve seen a fox carry away a squirrel, but I never noticed if it was going to eat it or not. Do foxes hunt squirrels just for sport or will they eat them? Can they eat the entire squirrel or do they discard part of the body?

How does a fox hunt and kill a squirrel? Aren’t these little rodents adapted to notice larger predators with their periphery vision? What makes a fox such an astute hunter?

In this article, we will find out, “Do foxes eat squirrels?”

Yes. Foxes are excellent predators of rodents and plenty of other smaller animals including:

Once they are able to capture a squirrel, they will rip it apart and devour most of its body.

If a fox discards the rest of a squirrel’s carcass, they may decide to urinate on what is left over in order to discourage other animals from approaching it. This is a sign that there is no more food available after a fox is finished eating most of the squirrel.

What Do Foxes Eat?

Foxes are omnivorous predators that will spend much of their time hunting and foraging. They are known to eat many of the following:

Foxes not only hunt and kill, they also store food in various caches underneath dirt, leaves or snow.

Do Foxes Eat the Entire Squirrel?

A fox will do its best to devour almost the entire body of a squirrel. They may leave some meat behind and entrails if they consider it foul, unpleasant or if they are already full.

A fox now has two options with the leftover squirrel: They can either take the leftover pieces and scraps and store them in separate caches around their den or discard it.

A fox will not want another animal to attempt to scavenge on the prey that they have captured and eaten most of. A common response for a fox would be to urinate on what is left behind. This would signify that there is no more food available for anyone else.

When the fox has devoured smaller animals such as a squirrel or mouse, they may often leave behind the entrails. The entrails are not easy for a fox to consume.

A fox would try to avoid eating entrails unless they are absolutely famished and in need of extra nutrients. Usually a fox will discard the entrails because of the unpleasant taste.

They do not usually provide enough nutrition for a fox who already consumed much protein and fat from the rest of the body of the prey.

A fox has the instinct of urinating on any leftover food to ensure that another animal will not be able to benefit from it either. 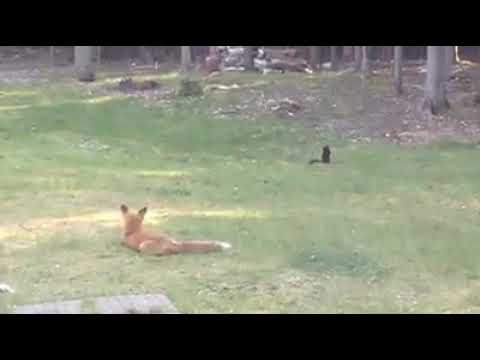 Foxes are scavengers and foragers along with using their predatory instincts to capture their next meal. Since they are opportunistic, they will approach a dead animal that they did not kill in order to have a free meal or snack.

Foxes will definitely attempt to eat a dead squirrel that has been killed by other means such as roadkill. They may drag the carcass to a safe location and begin to devour it.

Foxes are also able to kill more than they can eat and store them away for later use. This makes the fox a surplus killer.

Are Squirrels Scared of Foxes?

Squirrels are easily scared of potential threats that are larger than it. This includes foxes. Squirrels know that foxes will be able to catch them and attack them if they let down their guard.

Squirrels know that foxes linger around trees and camouflage themselves really well around their surrounding environment. Squirrels have to avoid foxes by any means necessary.

They have adapted to be able to climb branches and limbs of trees to escape the attack of a fox. A fox would have to hunt more than one squirrel to be able to satisfy its hunger.

Squirrels are agile and able to avoid the threat of foxes in many cases. Foxes are also stealth predators and fast runners. They can also climb trees and high walls to capture their prey.

How Does a Fox Catch a Squirrel?

The fox is able to camouflage itself against shrubs and trees. They are also adept at climbing trees, walls and fences. Foxes can detect the motion of a squirrel and catch it easily if the smaller animal is caught off guard.

Foxes have sharp hearing senses and are able to hunt at night while the squirrels’ visions are hindered. Squirrels in a tree are not safe from a fox that is hunting.

Foxes are opportunistic predators that will seek to find easy targets to consume. This includes squirrels. Squirrels are defenseless against the power of a fox.

They occupy the same habitat that foxes do and these larger predators will be able to kill them without traveling far away for their next meal.

Since foxes are also scavengers, hunters, foragers and predators they will be able to target anything in their territory that is an easy meal. This includes squirrels that have a difficulty escaping a stealth fox that can easily pounce on it at any given moment.

How Do Foxes Hunt Squirrels?

The fox is able to use its sly and cunning intellectual ability to remain calm and motionless while a squirrel is not noticing it nearby. Since they occupy similar territories, foxes are able to spot a squirrel before the potential prey has a chance to escape.

The fox will stay rooted in its place and wait for the squirrel to turn the other way. This canine is able to pounce and snatch the squirrel before it even has a chance to notice a predator behind it.

There are videos including the one that we have posted in this article to show you that a fox can easily pounced on a squirrel without it noticing.

How Do You Keep Squirrels Away From Foxes?

If you would like to help squirrels remain safe from foxes on the hunt, you can try a unique tactic that works very well. You can find fox urine available online or in hunting shops. A zoo can even supply you with fox urine if you are so inclined to ask them for it.

What you are going to do is fill a spray bottle with fox urine and spray it around your property to keep squirrels away. If a squirrel is able to smell the scent of fox urine, they will keep their distance.

Squirrels and foxes occupy similar territories, but the smaller of the two would avoid anywhere that they can detect the urine of a fox.

What Is the Squirrel’s Biggest Predator?

The biggest predators of squirrels are usually from up above. Hawks and Eagles hunt squirrels more than ground predators such as foxes do.

Eagles can see 8 times better than humans. They are able to find a squirrel from a distance of 2 miles away. Squirrels cannot hide from these predators from above.

Squirrels are also hunted by foxes and wolves on the ground. Squirrels has must always be on the lookout from predators above and even underneath the ground. Yes. Foxes definitely eat rabbits including other animals such as guinea pigs, chickens, squirrels and other rodents. Keep your pet rabbits indoors or caged to remain safe from prowling foxes that could enter your property without you noticing.

Rabbits are one of a fox’s favorite meals. They can hunt them throughout the entire year and spot them over the winter as well because foxes do not hibernate.

A rabbit is a quick and easy meals for a fox who can remain hidden until the last possible second where they pounce on a rabbit that is unsuspecting of this larger predator.

Yes. Grey foxes and red foxes alike are omnivorous predators that would easily take advantage of an opportunity to hunt and kill a squirrel. Their diet is adaptive and able to eat any type of protein that they consider edible.

A squirrel can be eaten as roadkill or hunted fresh from urban and rural locations. The reason why a grey fox will attack a squirrel is because they are usually a quick and easy target found in the same territories where they reside. A gray fox wouldn’t have to venture very far to find a squirrel.

It is not easy for a fox to be able to eat a full sized dear. This is because foxes usually hunt alone. Foxes do not hunt like a pack of wolves.

They would need the help of their counterparts to hunt larger animals such as deer. A fox would have to find the dead carcass of a deer in order to opportunistically feed on it. They will not be able to kill a deer all on their own.

Related posts:
Can You Give a Fox Chicken Bones? {What To Feed Foxes}
Fox Sounds and Meanings {Identify & Meanings}
How Do Foxes Survive the Winter Weather? {Do They Hibernate?}
Why Do Foxes Laugh? {Do They Actually Laugh?}