What’s that sound? Is it a fox? What are these fox sounds and meanings? Why do foxes make loud screaming noises at night? Have you ever heard a fox laugh out loud?

Foxes can make different types of sounds as a form of communicating to one another. Is there such thing as a fox language?

As interesting as it may seem, the sounds that foxes make can be alarming, frustrating and very annoying.

In this article, we will learn to identify and find the meaning behind fox sounds and their vocalizations.

Foxes are extremely vocal canines that will use multiple types of vocalizations to communicate to one another and other animals or humans.

They will do so in order to identify their territory, potential mates, protect their young and interact with humans or animals as a form of defense or welcoming strategy in order to receive food.

Foxes give out alerting signals to their counterparts to warn them if possible threats.

Foxes can yelp, scream, whine, laugh, bark, growl and many other sounds to indicate emotions, feelings or incite responses from their own species and other creatures in their environment.

What Are the Sounds That Foxes Make?

What Does a Fox Barking Mean?

When are fox is barking, it is trying to communicate to another counterpart or trying to warn off a predator. They could also be barking to protect their young away from potential threats.

Barking is a common form of communication that many canines use. Foxes may also bark during mating season to attract a potential mate.

Foxes can make howling sounds when they call or they can also make a sound that sounds like ‘a-woo’. Smaller foxes such as baby cubs, can make playful sounds that sound like ‘ack-ack-ack-ack’.

These noises usually indicated they are play fighting with each other. One of the most annoying sounds that foxes can make are loud screams that sound like babies or distressed females. Usually these screaming sounds are attached to mating calls. 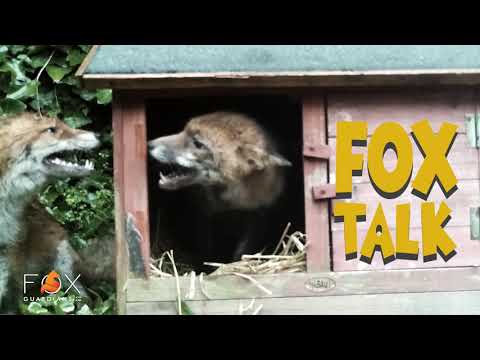 Why Would a Fox Growl at Me?

A fox will commonly growl when it is ready to fight over territory or another female. Male foxes will growl at other animals or humans as well as a warning sign to keep away.

The louder the growl, the better the dominant fox will be able to exert its dominance over a subordinate inferior fox who may end up whining or whimpering away. A fox can win a battle before it physically starts.

They can do so with their intense vocalizations. Foxes that surrender to the loud sounds of another will surely be defeated without any physical injuries. Foxes wish to make these sounds because they are not intending to aggressively fight with one another if they don’t have to.

What Does It Mean When Foxes Laugh?

A laughing fox is usually making this noise after intense and close personal contact with humans. The development of a relationship that a fox can have with a human may end up causing this canine to mimic or copy its human companion.

Foxes can make these ‘haha’ sounds to attract human attention in order to receive a warm and loving interaction or plenty of food.

Foxes have learned this sound can allow them achieve shelter, warmth and food from humans. Foxes have been tamed over the years and turned into pets who have learned to copy the sound of our own laughter.

Why Do Foxes Yip?

Foxes can make a high-pitched yip sound that is similar to some dogs. A quick yip sound me exemplify sudden surprise.

If a fox is caught off guard, it may yip multiple times to alert others that something is strange or an intruder has alarmed it.

Now the rest of the animals in the area, including a fox’s counterparts, can also be on alert due to the yip sound that a fox has made.

Why Do Foxes Make Horrible Noises?

Some foxes can make horrible screeching or screaming noises that can either alert others or attract females during breeding season.

This means that you might be hearing a territory battle between rival foxes. Females also make the screaming noise during mating to show that they are ready for a potential male to enter her territory. He may also scream to make his case as a potential mate.

While it sounds horrible to us, foxes appreciate when another fox can match or surpass their own screaming sound to indicate their availability and suitability. The screaming sound that you may hear may resemble the sound of a crying baby at night or an angry female. A female fox could be making incredibly loud horrible noises that sound like screeching or screaming.

It could be occurring while they are mating or just before as they are able to attract a mate. It may sound like foxes are attacking each other, but most likely they are just mating and these are the terrible noises that result from it.

Yes. Foxes make loud screaming noises as a contact call to signify breeding season has started in the early spring. It’s a call that is blood-curdling and it sounds like someone is being horribly attacked.

If you have never heard this type of screaming noise, do not be alarmed if it occurs. It is usually a harmless occurrence with foxes trying to compete for the opportunity to mate with one another.

How Do You Stop Foxes From Screaming?

If the sound of screaming fox has been keeping you up at night, you may have to resort to using fox repellents.

You can try to keep the screaming foxes out of your garden by installing a scarecrow fox repellent device. They are operated with motion sensors.

They can spray out jets of water to frighten or startle the fox that is trying to scream in your property.

Do Foxes Make Noise When Mating?

Yes. Foxes make terrible noises when they are mating. They can be screaming at each other and you might think it is a territory battle, but it’s actually a female who is screaming at the top of her lungs during mating.

Do not be concerned about these noises unless they are keeping you up at night. You can purchase a fox repellent with a motion sensor to spray jets of water at them to keep them away from your property.

Red foxes are very vocal animals that are found in urban and rural locations. They could be making these noises to signify multiple meanings. Let’s look at them now:

Barking is usually a self-defense noise to warn off enemies. It also expresses anger or they may bark while play fighting with each other as well.

Howling is a sound commonly made at night when foxes gather in packs. Howling is usually a sound made when they are defending or claiming their territory.

Growling is usually a sound made when foxes are trying to fight off enemies. Growling at a low pitch sound would try to keep other animals away from a fox’s territory. It is a sound to intimidate others.

Screaming is a sound that red foxes make usually during mating season. Female scream to attract males during this time. Males may also scream to keep away other competing males away.

Yelping is a sound that red foxes make when they are distressed. It is an alarming call to signify to other foxes that there might be large predators in the area. Males may also yelp when they are excited about the opportunity to mate.

Yipping is a sound as a defense mechanism or simply playful fighting. They can can indicate this pleasure or signal other foxes to join in defense if there is a possible threat nearby.

Laughing is a sound that foxes make as they’ve learned to mimic humans in order to get closer to them. Humans are able to provide foxes with shelter, warmth and plenty of food. If a fox is tamed, it may learn to mimic in copy the sound of human laughter because we enjoy it so much.

Red foxes may whimper when they are hurt, threatened or endangered. It is a sound that they make when they do not wish to fight. An inferior fox may whimper to signify defeat against a dominant alpha fox.

Whining is a sound that foxes can make when they are sad, bored or discontent. Whining is also common in foxes that are playful during their juvenile phase. Some foxes whine to greet others.

Hissing is a sound that foxes make when they warn others as a form of threat. Hissing may be accompanied by a potential attack. A mother may hiss to protect her newborn cubs.

Foxes make several types of noises that vary in pitch and sound. They do so to vocalize their mood and intentions. There are multiple meanings to the various noises that foxes can express.

We hope that some of the examples in this extensive article can help you determine why foxes make the noises that you are hearing.

Related posts:
Can You Give a Fox Chicken Bones? {What To Feed Foxes}
Do Foxes Eat Squirrels? {How Foxes Hunt}
Why Do Foxes Laugh? {Do They Actually Laugh?}
How Do Foxes Survive the Winter Weather? {Do They Hibernate?}