Gophers and moles can be very destructive to your garden. These can be declared as the public enemy of your garden.

There are various ways by which you can get rid of them. Use gopher trapping & poison are the most popular ways.

Today, we are going to discuss another very effective method that is killing gophers & moles with propane.

In this method, you just blow out their tunnels, and the rodents which are present in the tunnels will die with the blast.

For doing that, pour some propane in the tunnel, and ignite it. If you don’t have propane, then you can also use other fuels like gasoline, natural gas, or butane. We just need a detonator.

When you ignite it, you’ll blow the tunnels of gophers, and they will die. 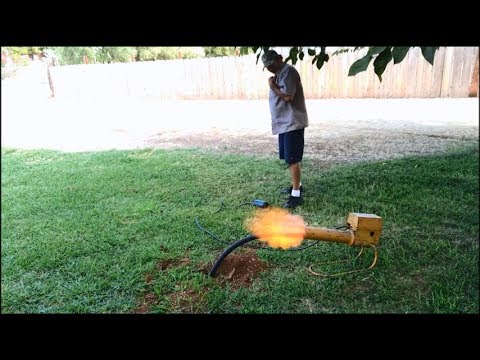 The propane gopher killer is also known by the name of gopher flares. Most of the time, a mixture is used which includes propane and oxygen. Now, you’re thinking, it’s a very good method of killing gophers with a blast. But, there’s a catch! Just think about it.

When you’ll blast their tunnels, what will happen? The tunnels will be destroyed, and also your garden. Yes, your garden, including your beautiful flowers and plants which you had grown after the hard work of months. Your whole garden can be damaged.

The plant roots can be burned. You might kill every gopher, but you may kill your plants too. So, this method can be used when you have no plants in your yard, or you are thinking of replanting.

But, if you don’t want to replant everything, and do all the hard work again, then you should not use propane blaster.

Where to Use Propane Blaster?

If you have a small and beautiful garden, then I’ll recommend that you should not use this method.

This method is good for those, who have a big yard or an open field, where you want to plant something new or if you don’t have any plants in that area.

But, before using the detonator, you should consult an expert. Using a large amount of detonator in a small place can result in some serious damage.

If you want to blast the tunnels of gophers, then you need to be very careful. You should have proper training on how to handle propane for blasting their tunnels.

Any mistake can be dangerous and can result in even the worst situation that having gophers in your yard. How to Stay Safe While Using Propane

The first thing that you should do is to stay away from propane if you have no idea of what you are doing.

If you have decided to use it anyway, then make sure to wear a fire resistant suit and gloves. Do not take it lightly. Always maintain a good distance from it in case of any unexpected situation, you’ll stay safe.

A Small Garden, Now What?

If you have a small garden, then you should go for the best gopher poison bait on the market, or you can also use traps. By using that, you won’t do any damage to your garden.

How to Make a Gopher Blaster

If you would like to make a gopher blaster, you would need to be a little bit handy. You’re trying to ignite an explosion under the ground to kill anything in that tunnel.

The gas that you release into the tunnel will explode upon impact with ignition at a rate of 5000 feet per second. The explosion will quickly and certainly kill any rodent such as gophers or moles in this tunnel.

We highly recommend either purchasing a gopher blaster online, renting one,  or speaking to a professional about your intention to build your own device. A commercial grade gopher blaster can run a cost of over $1,000 or more.

Is Killing Moles With Gasoline the Easiest Way?

No. Killing moles with gasoline is not the safest, easiest or fastest way. We recommend you consider searching for mole traps where an animal such as a gopher or a mole can be trapped and killed on contact. You could use bait such as earthworms.

You can also use rodenticide or mole repellent. A great option without having to resort to using gasoline or gopher blasting techniques is a store-bought gas bomb.

Place the gas bomb at the entrance of a gopher or mole tunnel and allow the gas to seep in. Keep your pets away from the area while you perform this poisonous technique.

How to Collapse Gopher Tunnels With Propane

Your aim is to combine propane with oxygen in the air to enter the hole where a gopher or mole has burrowed Itself. All you need to do now is set off a spark. You may light a match from a distance and throw it into the hole.

The shockwave is going to concuss and then kill a mole or gopher instantly. The gopher tunnel is going to collapse as a result . This procedure runs the risk of injury or harm to the rest of your yard or garden.

You may wish to consider other techniques such as releasing a gopher bomb that slowly releases gas into the tunnel instead of a sudden blast coming from a propane explosion.

We hope that you had liked this article. Thanks for visiting ThePestManagement.com for the best information to help you to make the pest control process easy, safe & affordable.

Related posts:
Can You Kill Gophers With a Pellet Gun? {What About a BB gun?}
Do Gophers Come Out in The Rain? {Do They Like Water?}
How to Get Rid of Gophers With Gasoline {Does It Work?}
How High Can Gophers Climb {Can They Climb Trees & Fences}