The Stink bugs can be large, shield-shaped or oval insects. The stink bug has got its name from the tendency of releasing foul odors when disturbed or crushed. Many other insects have the similar characteristics which might include ants, beetles, and other bugs.

They produce bad and foul odor in order to keep their predators away. It happens when they secrete through glands on their abdomen.

The adult stink bugs are about 2 cm in length. Their bodies are as wide as they are long. Though, they all stink fairly equal. They normally are of Mottled grayish-brown color and have 6 legs.

Few Adult stink bugs are brightly colored. The most common colors are green or brownish. The immature stink bags are known as nymphs. Their color can be black to yellowish. Many nymphs will change their color while growing. Some nymphs have spots or can have other distinctive markings. The nymphs of the brown marmorated bug will have red eyes.

Stink bugs can be a big problem. I know, you want to know about whether stink bugs bite or not. But, I liked this video so much that I wanted to share it with you. 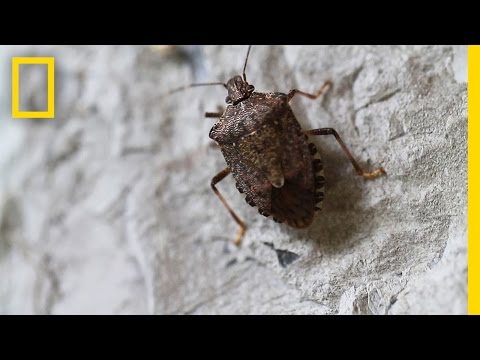 No, Stink bugs normally don’t normally bite. In fact, some species such as the brown marmorated stink bug are almost physically incapable of biting.

Some Stink bugs might bite, but, mostly prefer to feed on the various plants and fruits and will infest them. It will make the food to be unsafe to eat and can cause diseases.

The stink bugs though emerge in such large numbers, they appear to infest the properties quickly.  These stink bugs can feed on the juices of leaves, stems, fruits, nuts and various seeds.

The Stink bugs mostly and commonly prefer vegetables and fruits. They use the mouthparts to force their way into the skin of the fruits and vegetables and drink the juices within. This will usually leave dark and shrunken marks on the produce. It will make them unstable to eat or to sell.

Their sole defense mechanism is the odor that comes out from the chemicals which are secreted through glands on their abdomen. The odor is thought to keep the predators away.

Even if they don’t bite, they can become a nuisance when they enter the home.

Thus, it can be determined and said that the bug won’t bite. But, can be a real nuisance for your home or on the farms.

But, the question arises will the stink bugs bite humans?

Let’s discuss it further that whether the stink bugs will bite humans or not. The answer to this question is No.

These insects feed using a proboscis but aren’t like other blood-sucking animals. They don’t need to feed on blood to reproduce. Therefore, there is no absolute reason which can be there that the stink bug will bite you.

Even if Stink bugs mostly don’t bite people but, they can be a great disturbance if they enter your house.  Some people use a vacuum cleaner to get rid of the bugs from the walls and windows of their homes. But, it will eventually cause the vacuum to have an unpleasant odor for a while.

The stink bugs that bite people are predator stink bugs which also have a few exceptions. These predator species are beneficial to the environment and will eat the harmful pests in the gardens, farms, and orchards if provoked these species can cause a harmless, but painful, bite.

The stink bugs rarely bite people, but even if they do, you don’t need to be worried. The bite itself isn’t poisonous and is just itchy. It will disappear after a few days. They also have not shown to cause or transfer any diseases or parasites though, it can result in a raised welt.

Though their bite can cause a burning sensation in the rarest cases and the professional doctor should be consulted in this case.

It depends on the species of stink bugs that whether it can bite humans or not. But, it can be said that the stink bugs won’t bite humans until it is provoked.

It is difficult to determine that the stink bugs bite or sting. Let’s learn about it.

Do Stinkbugs bite or sting?

Most of the species of Stink bugs cannot bite or sting. The only method which they use for their defense is the bad odor they produce. There are, however, some predatory species of stink bugs which can bite and a few of the plant-eating stink bugs can also bite people. While when stink bugs bite, it may hurt the person, but, is not dangerous.

The brown marmorated stink bug is an invasive species can also provoke allergic reactions to some people. The smell emitted by them is an aeroallergen that can cause both rhinitis and conjunctivitis.

The stink bugs can vary in size and can be large as almost 2 cm long.

In the springtime, homeowners will often find the stink bugs walking up on the walls or flying toward windows. And when the homeowner will swat the bug, they will give off an unpleasant odor.

Furthermore, their mouths aren’t structured in a way that will enable them to pierce, sting or even bite. In fact, some of the species feed on plants.

What Do Stink Bugs Eat?

These stink bugs are plant-feeding bugs. They can attack seeds, nuts, and fruit.

Along with that, they also love to eat peaches, apples, green colored peppers, soybeans, pecans, and tomatoes.

They have also been found feeding on the developing cotton. These bugs can be serious pests in farms, gardens, and orchards.

There are also few species of stink bugs which might eat other insects. They also feed on harmful pests like caterpillars and even other stink bugs. These bugs are hence beneficial and will protect the plants.

The Stink bugs can be large, shield-shaped or oval insects. The adult stink bugs can reach almost 2 cm in length. The width and length of this bug are the same. Their legs can extend from the sides; this will make the adult bugs even look larger than they really are.

The stink bug can be green, brown or grayish in color. They change different colors while turning into an adult.

Nearly everyone has been bitten and stung by an insect in their life. Whether you’ve been attacked by a mosquito, fly, stink bug or some other bugs, they usually will cause a mild reaction.

The body of the person will react to the venom or other proteins that insects will inject into you or can transfer to the body through their saliva. This can result in symptoms at the site of the bite or sting, such as:

The severity of the symptoms can be different depending on the type of insect.

Though, a stink bug bite can’t really be dangerous. In fact, some of the stink bugs can’t bite or sting on human beings.

The above discussed are the symptoms of stink bugs. But, what happens if a stink bug bites you, let’s discuss.

What happens if a stink bug bites you?

The stink bug cannot really bite you. But, in the rarest cases, some of the species can bite humans and might attack when provoked.

The stink bugs don’t really bite people but when it bites, it can cause you a sensation of burning in the rarest cases. If the burning sensation is there, you should take professional help in order to avoid the various further reactions.

But, can a stink bug bite make you sick, let’s find out in the following para.

There are none of the species of stink bugs worldwide which can be dangerous and poisonous to people or pets, yet the pests are all the same.

But, Stinkbug bite cannot make you sick. The bite will normally disappear within a few days.

If there is some sign of allergic reaction from the stink bug bite. You should follow these steps as a precaution for the minor symptoms:

The Stink bugs don’t really bite people. Some of the stink bugs can’t really bite or sting the human skin. But, on the other hand, some species of them can bite human beings in the rarest of the cases. But, it cannot really cause any disease and will disappear in a few days.

If it causes a burning sensation, you should consult a professional.

So, it can be said that the stink bugs don’t bite humans in the most cases.

Related posts:
What Does Armadillo Poop Look Like? {How To Identify With Pictures}
Best Horse Fly Spray For Horses: {That Actually Works}
Ortho Snake B Gon Review {Pros & Cons, Is It Worth It?}