Are you wondering whether the insect you found in your surrounding is a yellow jacket? Is there a way to identify this arthropod? What Does a Yellow Jacket Look Like?

Can you tell them apart from other flying insects such as wasps and bees? Below, I’ve covered everything you need to know to identify a yellow jacket.

An Adult Yellow Jacket has a characteristic thin waist, elongated wings, antennae, and six legs. They often fold their wings while resting, and they can grow up to 5/8th of an inch in length.

You can identify yellow jackets by their unique features. They have; Several factors must be considered to identify Yellow Jacket; otherwise, one might mistake it for other arthropods like bees. Thus, to better identify this insect, you should consider the following:

Yellow jackets look quite like bees, but they differ in different ways, including their body shape. The thorax and abdomen region of a Yellow Jacket is narrower than that of bees.

It features a smooth, convex-shaped posterior with a sharp edge.

Yellow Jacket has six legs with four on both sides of the body. They have antennae attached to their well-defined head.

Yellow Jacket wings are light and often stretch upward except when they’re resting when they fold the wings and keep it laterally against their body.

Yellow jackets’ bodies can be defined by their yellow and black stripes, which is where they derive the name “Yellow jacket.”

The yellow is more pronounced in the abdominal region (posterior position) of most Yellow Jackets, while black stripes primarily cover the head. They also have characteristic brown wings.

Like other members of the class Insecta, Yellow Jacket has two separate genders — male and female. The two differ in many ways, but the most obvious is their size.

The females also have stingers; therefore, they are more dangerous. With this stinger, also called an ovipositor, female yellow jackets can repeatedly sting and deposit venom in a predator.

The ovipositor of a female Yellow Jacket is also its sex organ.

A queen Yellow Jacket can also lay thousands of eggs at a time. A male, on the other hand, can’t do so.

Besides the size, which is the most apparent difference between the male and female, it might not be easy to differentiate a living male Yellow Jacket from a female. This is because a close examination of the insect might be challenging if it isn’t dead.

If you mistook a female for a male, you might end up stung multiple times. Hence, if you must examine a the insect to know the differences in both gender, you should get hold of a dead one. Also, the insect is fragile; therefore, it should be handled with caution.

Yellow Jackets can live in any human habitable region. Their nest is often built underground, tree stumps, hollow logs, attics, tree stumps, under eaves, between walls, and recycling bins with sugary wastes. For the underground nest, it is usually built in leftover squirrel holes.

Yellow Jackets search for a leftover hole and build their nest inside it. If it isn’t deep enough, they can dig deeper using their strong mandible. They strategically design the burrow to drain flood so that they aren’t washed away by it.

Yellow Jacket Queens is the biggest in the colony. Unlike the workers that grow about 12 mm (0.47 in) long, the Queen grows up to 19 mm (0.75 in) long. More so, Queen Yellow Jacket doesn’t die during winter like other workers.

Queen Jackets have antifreeze substances in their blood, preventing their blood from freezing during winter. When workers die during this period, the queen survives and lays new eggs to produce new workers. The Queens are usually the biggest member of the colony. They grow as much as ¾ inches long. Workers, on the other hand, don’t often grow beyond ½ inches long.

Like other members of the colony, the Queen also has black and yellow stripes, which is a general feature of Yellow Jackets.

The Queen, being a female, also has an ovipositor, which it uses for reproduction and self-defense. Thus, with such a feature, Yellow Jacket Queen can sting when they perceive a substance as a threat. They also have elongated brown wings that fold laterally when at rest.

A Yellow Jacket nest is like a wasp nest. Made of softwoods and has honeycombed cells. However, you might find no wasp flying around the nest, but you might find one or two on standby close to the entrance. 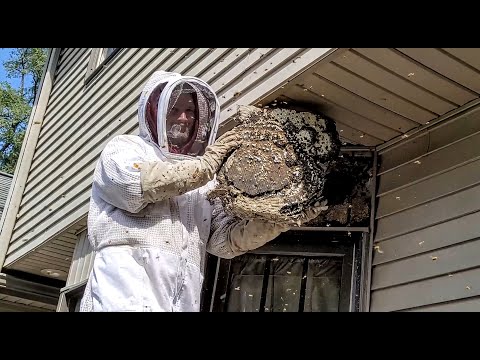 If you find an empty nest during such a period, it is probably not for Yellow Jacket. The only time of the year you’ll find empty Yellow Jacket nests is during winter when the workers must have died of cold, leaving only the Queen.

There are different types of Yellow Jacket nests based on their location. They include:

This type of nest is created under the ground, in an abandoned squirrel hole. It is pretty challenging to identify, though, but you can still find it following a simple trick. The nest looks like a cave designed with paper, burrowing down into the ground.

The burrow is often covered with leaf litter. Thus you can check out this sign to identify a Terrestrial Yellow Jacket nest.

Another good way to find a terrestrial Yellow Jacket nest is to check the altitude at which the insects are flying. Yellow Jackets living in such nests will usually maintain a low altitude. Hence, seeing this may indicate there’s a terrestrial nest nearby.

This is the most common type of wasp nest. You’ll find them halfway up mid-sized trees. They’re dominant in deciduous and coniferous forests. Often, you’ll find Yellow Jacket nests in the crook between a branch and a trunk. Thus, you don’t have to look too high to locate this nest.

Yellow Jackets often nest in residential structures as well. You’ll find their nests on roofing. Since they like holes, they prefer to nest in chimneys with small crooks. They also make their nests along gutters.

What is the Difference Between a Yellow Jacket and a Wasp?

Yellow Jacket is the common name of a type of wasp. Thus, Wasp can be said to be a general name for a group of flying insects, and Yellow Jacket is one of them. So how to tell them apart?

Differences between the two include: Yellow Jackets are wasps belonging to the Vespula and Dolichovespula general. Members of the wasp families are large flying insects; Yellow Jacket, on the other hand, is small but more aggressive.

Hence, if you’re attacked and strung by other wasps, the sting will be less than that of Yellow Jackets. Thus, Yellow Jackets stings more than other members of the wasp family, but their sting doesn’t hurt as much as the others.

In a more precise term, wasps are insects belonging to the Hymenoptera order besides ants and bees. Hence, any other members of the order that aren’t considered ants or bees are wasps.

Paper wasp, a typical member of the Hymenoptera order, is usually regarded as wasps. It differs from the Yellow Jackets in various ways.

For instance, paper wasps are non-disruptive wasps, while Yellow Jackets are a disruptive type.

Wasps hunt and feed on insects; therefore, they’re likely not going to approach or attack you as long as you don’t pose a threat to them.

Yellow Jackets, on the other hand, are more attracted to human foods and garbage. They are aggressive and can attack to defend themselves. Yellow Jacket also has larger colonies than paper wasps.

What is the Difference Between a Yellow Jacket and a Hornet?

Their yellow and black stripes often distinguish Yellow Jackets. They also have a tiny waist. The body of Bald-faced hornets, on the other hand, is almost entirely black and has characteristic white markings.

You can identify Yellow Jackets from Hornet on different grounds. Firstly is their body. The former is tinier than the latter.

The former also has yellow and black striped bodies, which is why it is usually confused as bees and wasps, while the more significant part of the latter’s body is black. Judging by their nests, Yellow jackets often nest in the ground, while Hornets’ nest on trees. However, you can find the nests of both insects in your home, especially in the attic. Often, Yellow Jackets hide their nests under grasses or bushes.

This is unlike Hornets that keep their nests in trees, bushes, under eaves or any protected area they find.

Yellow Jackets are regarded as extremely dangerous insects. Their sting isn’t only painful, but it can also cause severe reactions. They don’t just sting once; they can sting multiple times, depositing their venom with each sting.

Yellow Jacket is not a friendly insect; it is considered to be highly dangerous. You may consider the following reasons in this regard:

They can sting multiple times, Their sting is toxic, When they attack or being attacked, they can release certain chemicals that could attract more Yellow Jackets to attack.

Thus, if one attacks you, more might attack you if you don’t leave the area immediately. Such an attack could be catastrophic.

Their sting could cause severe pain, swelling, and reddening

Yellow Jacket venom could cause itchiness and rashes accompanied by a swollen throat and tongue.

This could cause difficulty breathing, stomach cramps, dizziness, diarrhea, and nausea.
Complications from their venom could make you unconscious or comatose. It may be worse sometimes.

Yellow Jackets are highly aggressive and could attack a perceived threat as a form of defense. They have what we can term as “group aggression.” Thus, if one of the insects is being threatened, it can release a chemical, attracting the others to attack.

If there’s a better synonym to replace what Yellow Jacket is, it would be “the aggressive insect.” Once they notice a threat around them, they quickly mobilize and attack immediately. Yellow Jackets don’t attack because they hate you; they do so as an instinct.

They’re social insects; as such, they do things together. That is why you find them flying together in a straight line to fetch their food and return in the same straight line.

They’re naturally wired to do things together, and this is not limited to food. They collectively attack any perceived insect.

Yellow Jacket stings feel like an injection piercing your skin. However, the pain from such a sting is more severe than that of an injection. They release venom, contributing to the pain.

When you’re being stung by a Yellow Jacket, besides the sharp needle-like pain you feel, the affected area may also become red, and you may experience inflammation for the next few hours.

You may also begin to experience the following: