Do you that make ants don’t do anything except for mating with a queen? Why Do Male Ants Die After Mating?

How does a queen mate with a male ant? What causes the male ant to die so soon after mating?

In this article, we’ll find out why male ants die after mating.

Why Do Male Ants Die After Mating?

Male ants are called drones they are basically flying carriers of sperm. The queen distributes rations of food to her colony. She gives far less food to male ants.

The male ants are the tiniest of the colony. Their genitalia literally explodes after mating with the queen. The lack of food and inner explosion creates a fast track to imminent death.

Why Do King Ants Die After Mating?

Although some people refer to them as king ants, they are not kings of anything. They are simply flying carriers of sperm. They are better known as drone ants.

A male ant dies after mating because their genitalia literally explodes after vigorous copulation. A queen also does not feed her male ants much rations of food.

They do not work and only have one purpose in life which is to mate with the queen and die shortly after.

Do Male Ants Mate With Queen?

Yes. All worker ants in the colony are female. The male ants are smallest in size but they carry wings to mate in the air with their queen. This is called the nuptial flight.

Why Do Male Ants Lose Their Wings?

Male ants only carry wings to use for mating purposes which happens in the air. This is called the nuptial flight. Once the male has completed his mission, the wings drop and he dies soon after.

The queen ant will also shed her wings. The wing muscles that remain will become nutrition during the beginning stages of developing her colony. 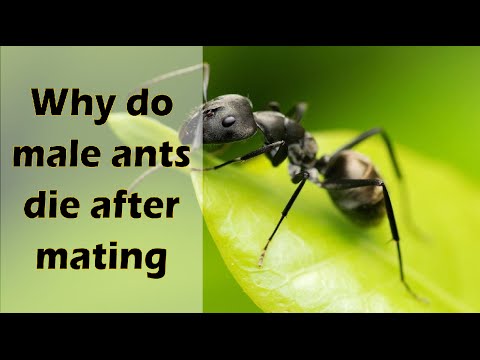 Do Male Ants Have Fathers?

You can say that the male ants are the fathers of the female worker ants. The fathers have no role in the colony besides mating with the queen.

The real purpose of a male ant’s existence is to operate like flying sperm. They have wings, they fly in the air, they mate with the queen, and die shortly afterwards.

How Long Do Male Ants Live After Mating?

Male ants may only survive for a few days before they must die after mating. Even before they have a chance to mate with the queen, she has already reduced her rations for all male ants. They simply do not get enough nutrition to survive.

They are also the smallest from the colony. The queen is the only one that lays the eggs. When her eggs are not fertilized, male ants are born. Worker ants can survive for up to a year or longer while queen ants can live on for many years.

Why Do Male Ants Not Work?

Male ants don’t work because they do not live long enough to do so. They only have one work in particular which is to mate with the queen.

They only have one genome copy meaning that all of their sperm are genetically identical. They mate with a queen in midair and die soon after.

Male ants have one job. This job is to reproduce. You can say that this is their work. It is short-lived and so are the lives of male ants.

How Do Male Ants Mate?

The queen stores the male ant’s sperm in a special pouch. She opens this pouch to fertilize the eggs that she produces. Some of the eggs are not going to be fertilized. These unfertilized eggs are going to become male ants.

A male ant is not going to have the opportunity to mate more than once. The queen is going to find her own place on her own to start her nest.

The male ant is going to die. He will lose his wings and will never get another chance to mate again. The nuptial flight takes place in mid-air and only happens once in the life of a male ant.

What Is a Male Ant Called?

Male ants can also be referred to as king ants. This is not a correct assumption because they never receive any entitlement that a king would receive.

They’re almost exclusively flying carriers of sperm. Consider the exoskeleton of a male existing to only serve as protection for the sperm they are carrying.

Male ants are drones that are exclusively operating as sperm loaded missiles. They die because they are easy to produce. A queen and doesn’t even have to fertilize her eggs to deliver more male ants.

She can save the sperm in her pouch after mating and only use them to fertilize the eggs of worker ants. She will decide then if she needs more male ants or not.

A queen will also ration the food for her colony and give male ants the lowest portion. Male ants only live for one purpose; reproduce with the queen in mid-air, then perish as part of nature’s cycle of life.

Related posts:
Where Do Ants Go in the Winter? {Do Ants Die in Winter?}
How To Get Rid of Ants From Chilli Plants {Best Way Here}
Do Ants Eat Wood? {Top 13 Wood Destroying Ants}
Do Ants Take Fall Damage? {Do They Fear Heights?}

Home » Insects » Ant » Why Do Male Ants Die After Mating? {Do They Work In The Colony?}