Have you ever seen a swarm of flying termites flying towards a light source? Are Termites Attracted to Light?

Which termites do not like the light? Why do some termites look for light sources? Which types of lights are more attractive to termites?

In this article, we will find out if and why termites are attracted to light.

Are Termites Attracted to Light?

Porch lamps, utility lights, motion lights and a variety of neighborhood lighting that gives off heat, attract swarms of termites late in the afternoon or towards the early evening, especially during the spring season.

Do Termites Come Out in the Dark?

Yes. Many species of termites come out at night when humidity levels are high. They are attracted to light sources that give off heat in dark environments.

Flying termites swarm around these light sources looking to establish a new colony where food is available. Formosan termites and Drywood termites are most active at night. The peak of their activity occurs during the late spring and early summer.

If there are any food sources in well-lit areas area during the night containing cellulose which is commonly found in most natural and material items that are made of wood, they will attract swarm of winged termites looking to establish a new colony.

What Does Light Do to Termites?

Termites like to build tunnels in the soil that lead to the walls of your home. If these tunnels open up in to light exposed areas, they will look to dig into a darker direction.

Strong sunlight during the day deters termite. If you placed UV lights in your basement, garage or attic it is assumed that termites would be deterred in a similar way that they would with sunlight.

It is only in the dark where the light sources give off heat and attract swarms of winged termites known as alates who will look to start new colonies.

These specific termites are attracted to light while the rest of the working colony does not wish to be deterred by any light sources while they are digging their way into your home.

What Time of Day are Termites Most Active?

Many species of termites are active during the night. They are not fully nocturnal, but they enjoy dark spaces when they are at work digging expansive tunnels that can lead to your home.

The most active season in the year is the spring. Formosan termites that are winged will swarm at night looking for a place to call home.

This place will usually be near a light source that also contains multiple forms of cellulose rich wood nearby. Drywood termites in particular, are most active during the night. 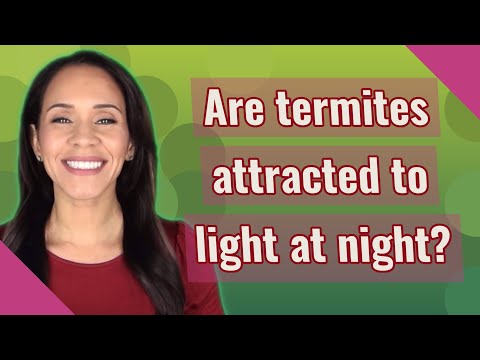 Do Lights at Night Attract Termites?

Yes. It is not just the light itself that is attracting the termites. Traditional incandescent light bulbs are also a source of heat.

They are cooler in their tone, but stronger in putting out heat compared to LED light sources. This is why you see many swarms of flying insects, including winged termites drawn in to these light sources.

Termites are attracted to incandescent and halogen bulbs since they give off more heat than LED bulbs.

No. LED bulbs are much less of a heat source compared to incandescent or halogen bulb. Insects like termites are looking to feel changes in temperature from light sources. This is what makes them traditional lights so attractive.

It is not just a light itself that winged termites are attracted to. They are drawn into the heat coming from incandescent are halogen bulbs. LED bulbs are more efficient and do not give enough heat for it to be attractive.

If you would like to avoid more bugs and termites from entering your property, you should switch your traditional lighting to LED bulbs.

Termites are attracted to a variety of different colors,  but what attracts them even more is the heat that comes off from the light itself. The following colors attract termite: Alates refer to the swarm of winged termites that fly close to well-lit areas near homes that contain plenty of cellulose for them to start new colonies.

They are active mostly during the late spring to early summer months. These termites are born with wings and are in charge of trying to find a new place to establish another colony.

Once they do so they can shed their wings. It is then time for the soldiers and the workers to continue digging tunnels that lead to cellulose rich sources of wood. Alates refers to the word āla in Latin which means, wing.

The male version of these flying termites do not follow the same path as the females who are searching to find new places for their colony since their sole purpose is to mate with the queen in the air called a “nuptial flight”.

Why Are Winged Termites Attracted to Light?

They will be seen near your doors and window sills. Any area that is connected to a source of light could be their new destination for establishing a new colony.

They will usually do this search during the late afternoon of spring and early summer. The more natural light starts to fade during the day, the more winged termites come out and swarm near light sources such as:

A better solution is to switch to LED lights as they don’t give off as much heat. It is not just a light source itself, but also the heat that comes from the light that attract termites and many other flying insects.

Where Do You Find Swarms of Termites?

Termite Colonies begin with swarms. They occur usually during warm or humid days in the late spring. Termite infestations impact over 600,000 homes each year in the United States. They cause almost 5 billion dollars in property damage.

Neighborhoods are well-lit with utility posts and private property lighting sources. It is up to winged termites known as alates to find these new sources of light and cellulose rich areas that will become a spot where a new colony might be formed.

If you turn off your lights or switch to LED lights, you might have a better chance of deterring these swarms that come out later in the afternoons or in the early evening.

If you notice an infestation of termites, these are usually the workers and soldiers who will be deterred by light sources such as direct sunlight are UV lamps while they are busy at work digging tunnels.

How to Stop Flying Termites?

If you are noticing swarms of winged termites flying near your house, you are close to an infestation. stopping a termite infestation involves treatments such as:

The winged termites themselves are not going to infest your home and eat away at the cellulose in wood. It is the soldiers and the worker termites who are going to create most of the damage to your property.

Stopping flying termites as easy as turning off light sources so they can be attracted to another destination. How to Identify a Termite Swarm

A swarm of termites can occur as fast as it takes to blink your eyes. These swarms happen during the late afternoon in late spring or early summer.

These alates or winged termites are trying to establish a new colony. They resemble flying ants but there are ways to tell them apart. Here are some ways that you can identify a swarm of winged termites compared to other flying insects such as ants:

If you see hundreds of discarded wings, your property may have become the new site for their current infestation where they have decided to build a new colony.

It is time to call in for professional help or beginning applying termiticide before things get worse.

Remember that light attracts winged termites and repels soldier and worker termites. Thanks for visiting ThePestManagement.com for the best information to help you to make the pest control process easy, safe & affordable.

Related posts:
Are Termites Attracted to Light at Night? (Which Ones?}
Why Termites Coming Out of Bathtub Drain {How They Get in}
What Do Termites Hate? {The Ultimate List Of Termite Repellents}
11 Signs You Have Subterranean Termites Infestation {Facts You Should Know}