This method of killing gophers with chewing gum is not scientifically proved. Some people say that it doesn’t work. It’s a waste of time.

But, there are a lot of people who bet that you can kill gophers & moles with bubble gum. So Does juicy fruit gum kill gophers and moles?

Juicy fruit gum can kill gophers and moles, but it is not very effective and you will have better success using something else such as poison.

There is no definite answer because there is no scientific research done on whether fruit gums kill gophers, moles, and other rodents or not.

But, when we take a look at the experiences of other homeowners who have tried this home remedy, then there is a mixed response.

But, generally, homeowners are in favor of using it.

So, I suggest that you should try this in your garden because for this home remedy, you do not have to spend a lot of money.

Just a few dollars or even less than that. If it works for you, then it’s great.

How To Kill Gophers and Moles With Juicy Fruit Gum

Step 1: First of all, cut many sticks of chewing gum into the pieces of about ½ square inches.

Step 2: Now, use a shovel, small hand spade, or any tool to dig into a gopher or mole tunnel. Remove the top layer of the soil, but try not to disturb the rest of the tunnel.

Step 3: Place one of the pieces, which we cut earlier, into the hole.

Step 4: Now, cover the hole again with dirt, just like before. Make sure, you don’t press too hard because doing so can close up the tunnel.

Step 5: Repeat this process wherever you find their tunnels in your property.

They don’t have poison in them. They don’t do any chemical reaction. The reason is slightly different.

Although it’s not scientifically proven, a lot of people believe that when gophers & moles eat it, then chewing gum stuck in their intestines. Therefore, it becomes the last thing which they eat. They get an intestine blockage, and eventually, they die in their burrow.

This method is not guaranteed to work. So, along with that, I recommend that you read about these 15 ways to get rid of gophers.

If it works, then it’s the best solution to get rid of gophers & moles because you’re not using any mole poison pellets or gopher killing traps. 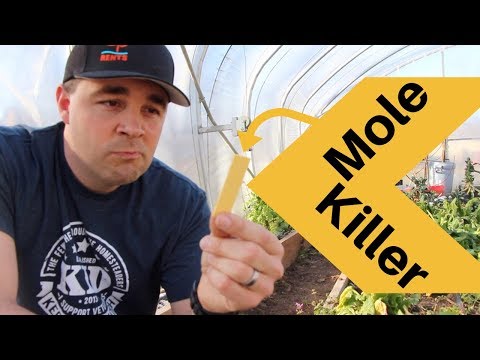 If it doesn’t work, then try any other home remedy, traps or poison pellets.

If you do not want to use any poison or trap due to safety reasons, then you can try to kill gophers with propane. It is dangerous while using it, but once you’re done. It’s safe to walk anywhere.

I hope this article helped you. If you have any questions or something you want to discuss, feel free to comment here.

Have you noticed that there are fleas and ticks in your backyard? Are you concerned that they can harm your pets and your family? In this article I will share some natural remedies that will help you...

Continue Reading
link to Will Gophers Eat Tomato Plants? {Do They Like Tomato's}

Gophers are little rodent pests that eat plants and vegetables that grow underground. But will they eat your tomato plants? Gophers usually will not eat tomatoes, leafs or stems of your plants,...